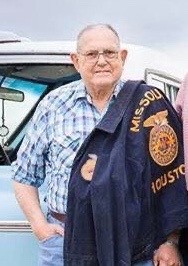 Herbert Van Kirkwood was born September 26, 1934, to Elmer Herbert Kirkwood and Clara Vivian Marie (Noe) Kirkwood. Herbert was married to his high school sweetheart Jane DeLois Perryman, on June 24, 1956, in Raymondville, Mo. by Kirby Fletcher. Herbert frequently referred to Jane as his little Indian princess. To this union was born Jan De and Van Ray. Herbert died on October 23, 2020, at Houston House Nursing Home, at the age of 86.

Herbert served in the US Army as a mechanic and was certified as a marksman and received the Good Conduct Medal. He worked as a mechanic for Brown’s, Honeycutt Chevrolet, and Crow Ford before working for the Missouri Highway Department of Transportation, from which he retired in 1997.

Herbert was a member of the First Baptist Church of Houston, Mo. until he transferred his membership to Central Baptist Church, where he served as a Church Trustee, Training Union Director, Executive Board member and other duties in the church until he was physically unable to attend. Herbert and Jane are remembered fondly by many people who they had picked up and taken to church for Bible School and other church events.

He will be buried beside his lovely wife Jane of 56 years, in the Central Baptist Cemetery. Herbert will be remembered for his love of family and most of all, for his love of God.