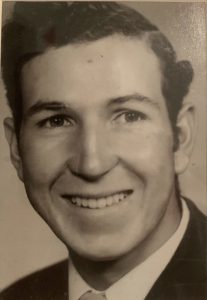 Glen spent most of his life in Texas County. He attended Crow Elementary School and Licking High School. He was on the high school basketball team and was a very good athlete. He married Nadine, his high school sweetheart. Glen and Nadine moved to Fenton, Mo. where Glen worked at Chrysler. They spent nine years there and had three children, David, Danita and Tracy.

They then moved back to Licking in 1970, near Montauk, where Glen worked at Doe Run in Boss for a time. He and Nadine then moved to just outside Licking, on C Highway, where they had cows, chickens, hogs, horses, lots of cats and a few dogs that were like family. They had a very productive garden that they used to feed the family. Glen spent 29 years at Missouri State Highway Department in Licking before retiring. He loved to keep busy and enjoyed working part time at Scott Material after he retired. He served on the Licking Water Board for several years. He even built his and Nadine’s home, with the help of his brother Donald, that they shared until she passed away in June of 2015.

Glen’s greatest joys included watching his children play sports and then doing the same for his grandchildren. He loved to mow the yard, cut wood with his chain saw, ride his tractor and 4-wheeler, and drive uptown to make sure it was still there! He became an avid reader, devouring books from the Licking Library. He loved spending retirement with Nadine. They spent many evenings during the summer sitting outside and watching the Cardinals on TV. Glen loved eating Nadine’s cooking, grilling out, making homemade ice cream, and family get togethers. He loved the simple life at home, and never cared to be the center of attention, but was always ready to help, and had many friends and family who loved him. Glen loved to crack jokes, loved to laugh, and made an impact while touching many lives.