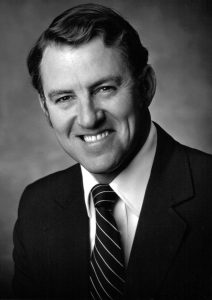 Growing up Jerry worked hard on the family farm, which had 50 to 100 head of cattle. He also helped maintain the cabins at the OK Resort on the Big Piney River. As a teenager Jerry worked at the state tree nursery with his father.

In 1954 Jerry graduated 8th grade from the one room Craddock School near Licking and in 1958 he graduated from Licking High School. Jerry served as a LDS missionary in the Northern California Mission from 1961-1963. In 1965 Jerry graduated with a bachelor’s degree in Accounting from BYU. From 1970 – 1976 Jerry served as Bishop of the St. Charles Ward for the LDS church.

He worked with various community organizations and districts including Texas County Soil and Water Conservation. Jerry had nearly a 40-year career with New York Life and received the Million Dollar Round Table Award.

A visitation for Jerry will be held from 5 – 7 p.m. on Friday, November 6, 2020, at Fox Funeral Home, 128 S. Main St., Licking. A funeral service will be held on Saturday, November 7, 2020, at 10 a.m. at the Church of Jesus Christ of Latter-day Saints, 693 Forum Dr., Rolla. Interment will follow at Craddock Cemetery. Arrangements entrusted to Fox Funeral Home. Online condolences may be left at www.foxfh.net.