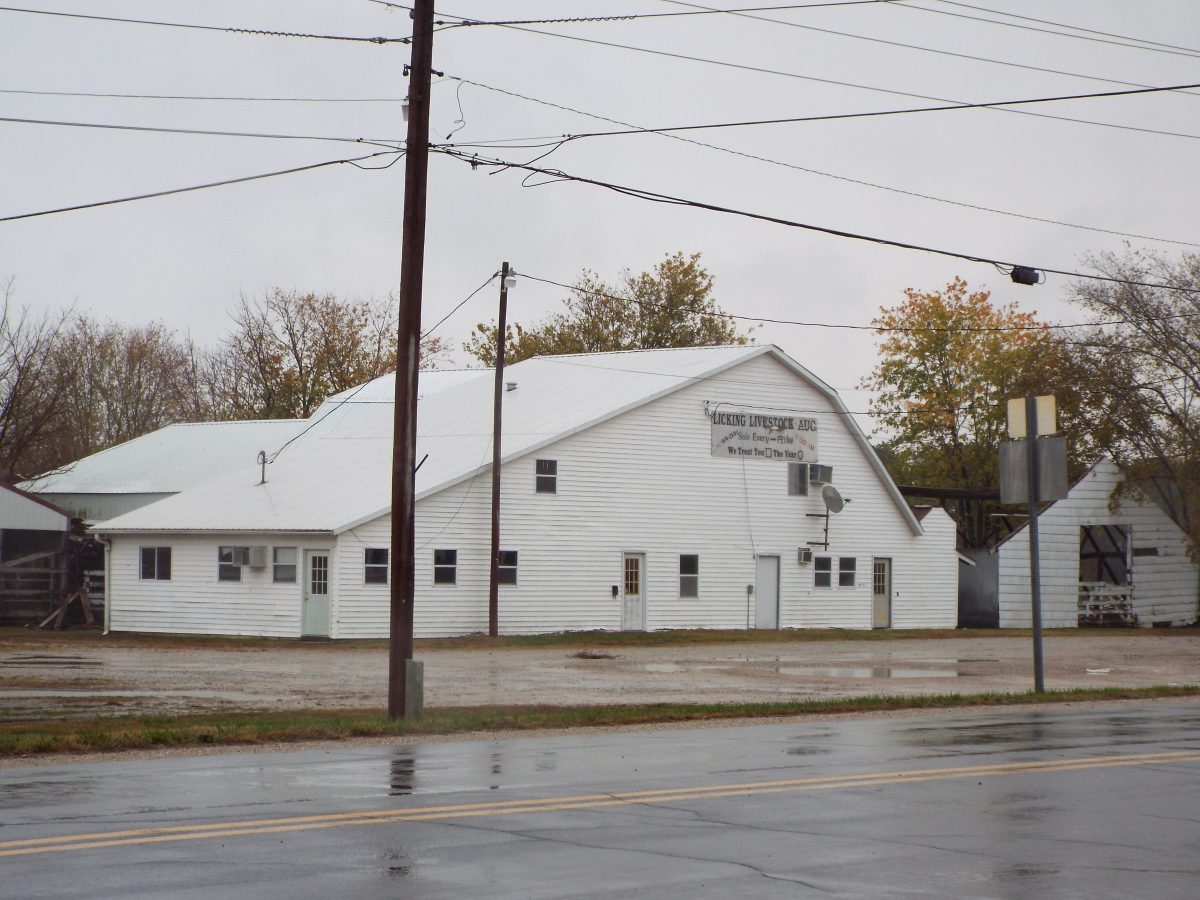 Photo by Christy Porter
After years of disuse the Licking Livestock Auction/Sale Barn is being dismantled, ending the era of sales held locally. It will live on in residents’ memories.

Licking Livestock Auction/Sale Barn, a Licking landmark, is being dismantled. One cannot help but notice the “We treat you square the year round” logo, which has been displayed for years. Historically sales were held on Mondays or Fridays over its tenure in the community.

Renee Lauderdale from the current ownership, Salem Livestock Auction, shared recent happenings. They purchased the Licking Livestock Auction Sale Barn and tried to run the sales at both locations, but it was not practical. The property has sat unutilized for the past several years. The Amish from Seymour approached them with an offer to purchase the buildings and remove them. “It is always sad to see a community landmark come down; unfortunately without local support, local businesses disappear,” she said.

The Amish began tearing down the buildings and stockyard pens with some 40 – 50+ men working throughout the course of the past week. The work will continue as long as necessary. They were removing the lumber and tin, which will be re-used in construction in their community.

Lauderdale said, “We’re not sure what we’re going to do with the property at this point.”

Many personal memories made at the sale barn have been shared.

“The sales were held on Monday nights in the 1960s. It was often busy from 7 a.m. until 7 or 8 p.m. I was a cook in the kitchen and it was a very busy place with long sale hours. We served breakfast, lunch and dinner, with specials throughout the day,” said Joan Brannam. 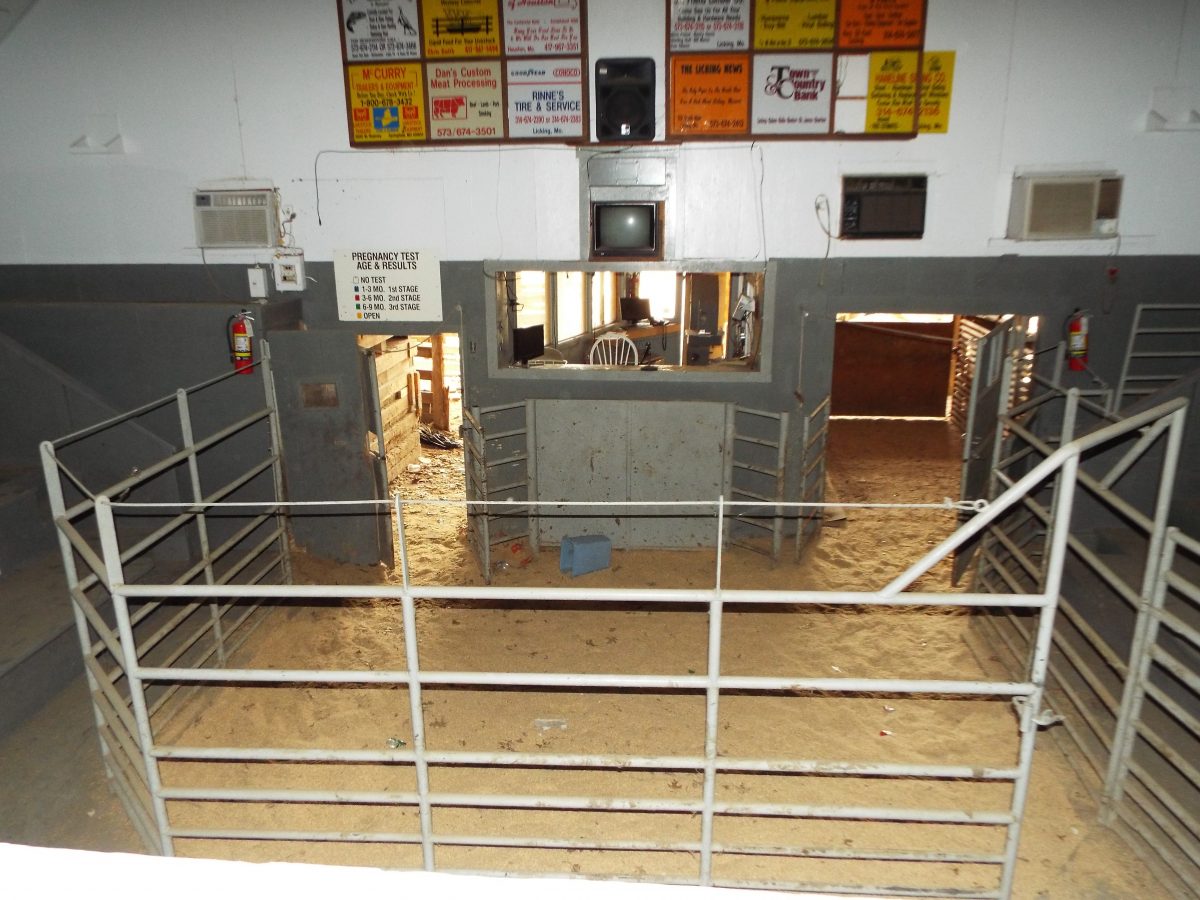 Photo by Christy Porter
Once a hub of activity with much local support, the auction ring stands eerily quiet.

Joyce Krewson shared, “I worked there around 1973. Very early on I was asked on sale day by Uncle Gene Krewson (owner) to call for the prices per pound on beef. We got the prices from a large stockyard in East St. Louis. Cattle and hogs were sold through the sale barn, with goats, rabbits and chickens often being sold in the parking lot. The sales would often last into the night.

“Sometimes what was called ‘pig dust’ would clog my throat on sale days, making it almost impossible to talk. Dr. B.J. Meyers would swab my throat and my voice would get better.”

Joyce continues, “Ruth Williams had a great café there, with hamburgers and such cooked on an iron grill. They were the best.”

Many area residents and business people would visit the café, having no other association, as such, with the sale barn.

Don Storm, along with George Buckner, purchased the sale barn in October 1992, after it had been closed for about 15 weeks. The name of the facility changed slightly from Licking Livestock Auction to Licking Livestock Sales.

Storm commented, “The sale barn was good for the community; on Mondays, those attending the sale would buy feed, groceries, gas and other products from local retailers.”

In February 1994, the sale barn was sold to Dwight Cox of Cox Cattle Co. “The Cox family has been actively involved in the cattle business for over 30 years,” reported The Licking News.

Taking a step further back, The Licking News published an article on Thursday, Jan. 17, 1946, “Work Progressing on Licking Sales Barn.”

“Mr. J.B. Barrett, owner and manager of the barn, has taken advantage of every workable day… Mr. Barrett state he hoped to have the barn ready for sales by March 1… (it) fills a long expressed need to farmers and stockmen throughout this vicinity, furnishing a ready market for livestock right at home.”

A year or two later, an article states that D.E. “Doc” Boyd became the new owner, being also a graduate of the Reppert Auctioneering College, and had cried sales in this community for several years. Local auctioneers Steve Buckner and Dennis Newby also cried sales at the Licking auction.

Stock show participants filled Main Street as far back as April 3, 1909, as shown in archival photographs. Additionally, prior owners of the Licking Livestock Sales Barn reportedly have included Nolan Dunlap and Terry Krewson.