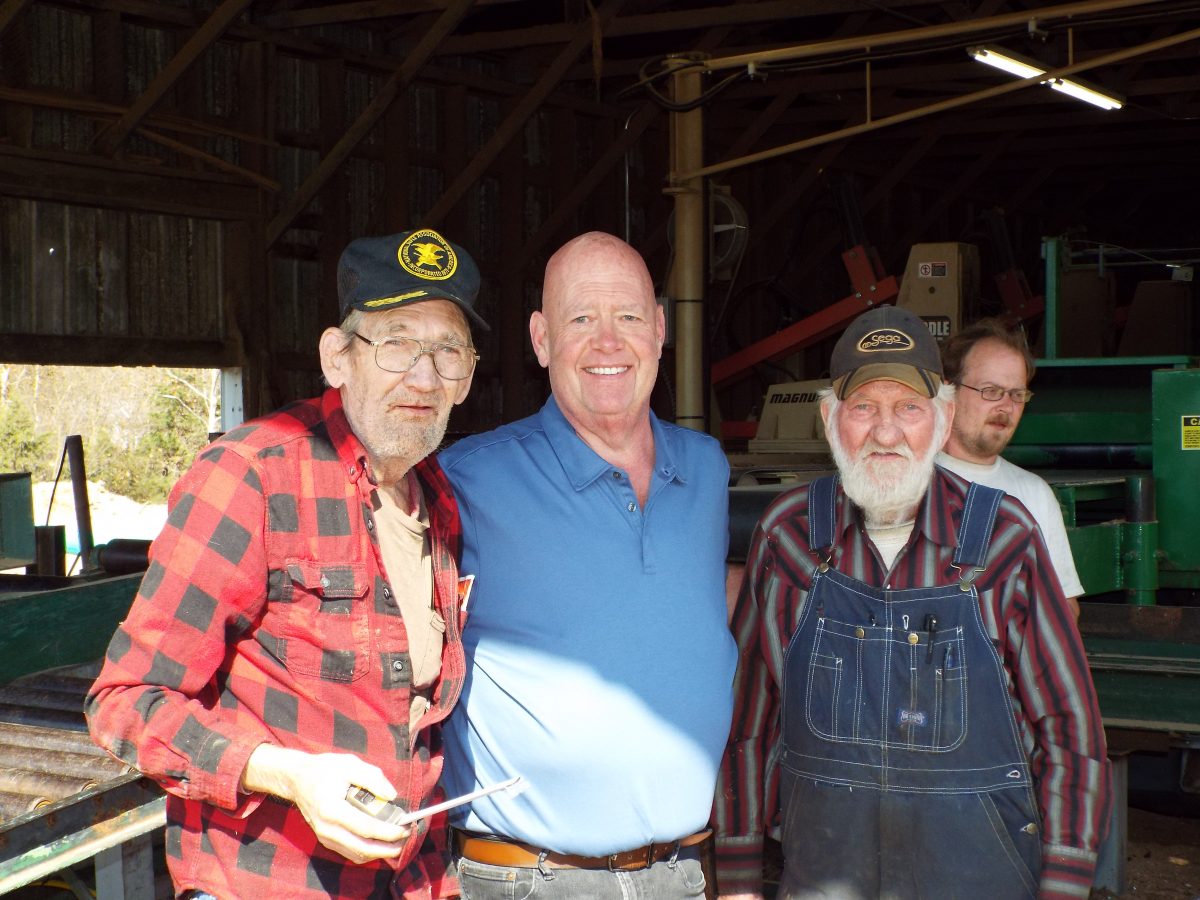 Photo by Christy Porter
Key people in the milling process are pictured here with owner Joe Frontzak. From left: Dean Moore, head sawyer, an employee of 25-years; Joe Frontzak; and Vernon Sullins, mechanic, an employee of 45-years. A third key person is the edger-man.

Established by Don Storm in 1972 with five employees, Storm Lumber has experienced substantial growth over the past 48 years. Don was hands-on in the early 1970s, when brother Dale Storm came on board as an overseer and plant manager. Don then moved into a mainly administrative position. Storm worked with his father, Wilford, in timber from 1965 – 1968, part-time through the school year and full-time during summer breaks. His entrepreneurship of Storm Lumber began with opportunity, purchasing buildings and family land comprising 10 – 15 acres. He saw the facility evolve from being a manual mill with handsaws to transitioning in the 1990s with full automation and electric power units. In 1972, production was 6 – 8,000-feet per day and currently, with the new technology, 25,000-feet per day is milled. From the initial five employees, Storm Lumber currently employs an average of 33. A few employees have been there since shortly after start-up, with others having tenures of different durations. 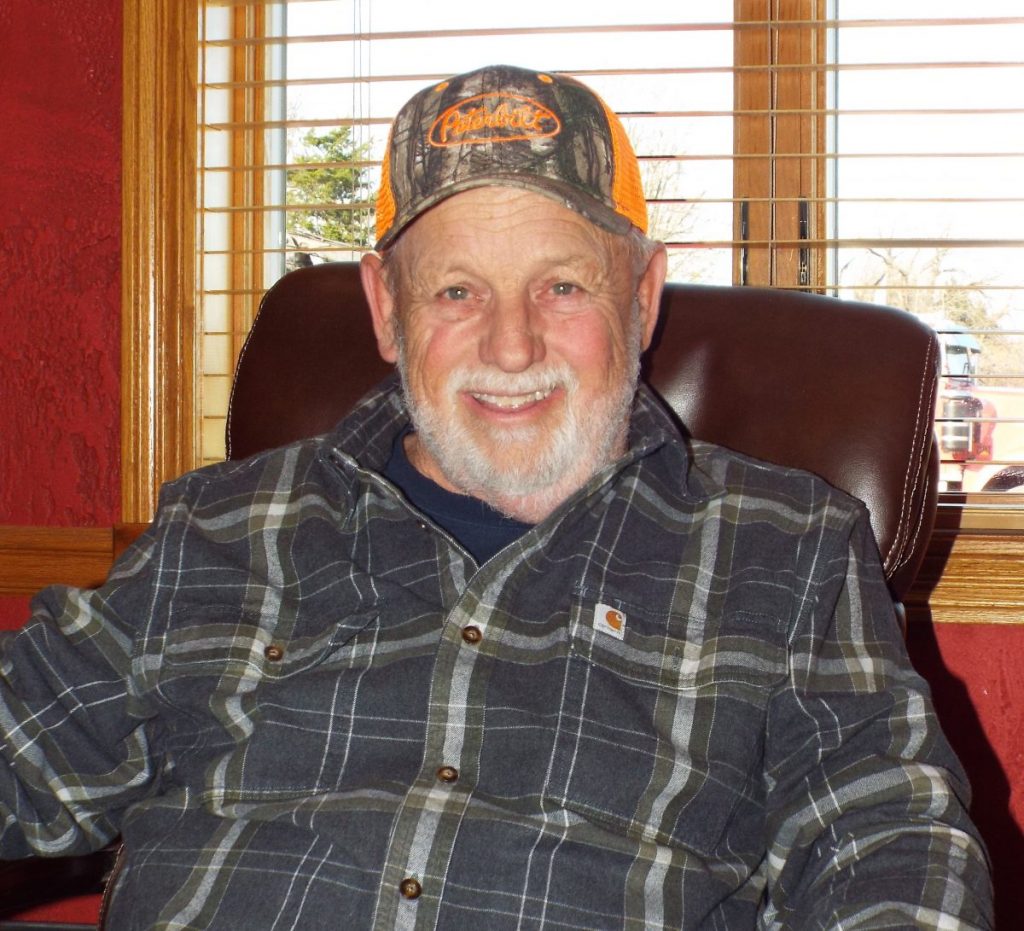 Photo by Christy Porter
Don Storm, the original owner of Storm Lumber, maintains a business relationship with the company.

After selling the company in 2018, Storm said, “I miss the hands-on aspects of the business.” He still visits with Dale every morning. Don and his wife Chris remain active in local business enterprises, and in the community.

Current owner Joe Frontzak has been in the lumber business since 1990. He is also the owner/president of L & E Pallets and Lumber, Inc., located in Homer Glen, Ill. “I became a pallet broker,” shares Frontzak. “That evolved into manufacturing and now into the sawmill enterprise, a re-investment. I had come to Licking to purchase lumber and did so by buying the mill.”

The timber brought into Storm Lumber never ends up in a landfill. Sawdust is sold for wood pellet fuel. Wood chips from the debarker are sold as mulch. The slabs from the debarker are sold to a charcoal plant. Scrap lumber is used in fireplaces and wood stoves. The cut lumber is utilized in the skid/pallet assembly shed, sold for industrial grade hardwoods, hardwood flooring, and several sizes of railroad ties or special cuts as contracted. Truckloads of the lumber and skids are transported to Frontzak’s warehouse in Illinois and to Houston, Texas.

Storm Lumber is a full operation site with three sawmills and an assembly shed for skids/pallets. The enterprise is comprised of a debarker, the first step, “skinning the log” or removing the bark from the logs, which is harvested from the surrounding area by local contractors. The timber is then run through the sawmill where the lumber is cut to rough sizes. The cut off/package saw sizes the lumber to specification. A mechanic and maintenance team ensure all aspects run smoothly. The mill was expanded in the summer of 2020 and further expansion is planned in April 2021. They maintain an operation schedule Monday through Friday, 7 a.m. – 3:30 p.m.

From the early 1980s to the present they provide lumber that is used for blocking material and flooring, including to a regional flooring factory facility. The majority of their production is skids, which differs from a pallet in that it is decked only on one side as opposed to both sides. Pallets are generally used for food products. Skids are used for industrial production purposes. Storm Lumber provides skids specifically made for steel and aluminum transport and storage. One skid can hold 20,000 lbs. of steel. In the 1970s production was one load per month; currently it is five loads per week.

The timber industry has been a thriving business venture and a way of life for many in the Ozarks, beginning in the early 1800s. People of the Ozarks had ample access to the forests of virgin pine and oak timber as early as 1816. With the emergence of the railroad, circa 1830, continuing through the Civil War, tie-hackers, tie rafting and the railroad crosstie industry kept the loggers busy indeed. While the need for timber has changed purposes, it is no less necessary. Many individuals in the area still supply raw lumber for everything from firewood to those businesses that provide finished products.

Storm Lumber, located on Hartville Road, continues the timber tradition of buying raw timber from local suppliers and producing skids, pallets, and lumber to other industries.