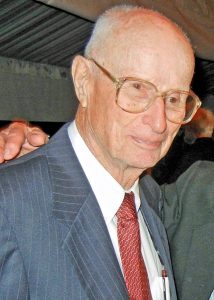 Bill graduated from Houston High School in 1941, while still only 16 years old. He received a B.S. in Agricultural Sciences from the University of Missouri in 1949, after a major detour for World War II.

Bill began active duty in late 1943, serving as a Ring Gunner on a B-29 heavy bomber crew in 1944 and 1945. He served in the 73rd Bomb Wing, 500th Bombardment Group, and 883rd Squadron, operating from the Mariana Islands. He completed 35 successful missions with over 500 combat hours and was honorably discharged as a Staff Sergeant with several medals, including The Distinguished Flying Cross and Air Medal (with 4 Oak Leaf Clusters).

After the war and college, Bill returned to Raymondville where he taught adult agriculture for two years in nearby Summersville. In 1951, he took over as Raymondville’s rural mail carrier, and continued that profession until he retired in 1984. Despite this 6-day-a-week job, he found time to build a house and farm operation southeast of Raymondville.

Bill was preceded in death by his wife, Joan; his brother, Robert L. Agee; and his parents, Arthur & Selma. He is survived by these nieces and nephews: Allen Agee of Texas, Ken Agee of Texas, Mary (White) Harlan of Rolla, Steven Detjen of Texas, Martha White of Ariz., Theron White of Texas and Chris White of Calif.

Many people have shared fond memories of Bill’s kind, cheerful disposition as he drove up with the mail. He also did many unsung good deeds over the years, especially for neighborhood widows, the disabled, and people just needing an extra hand. He had a lot of knowledge and experience with woodworking and mechanics, and was always generous with his time… and his storytelling.

In lieu of flowers, donations may be made to Allen Cemetery. Online condolences may be made at www.evansfh.com.