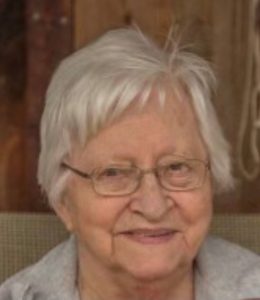 Frances Elinor (Flowers) Wilson was born December 11, 1925, in Bartlesville, Okla. to Otto and Fannie (Brown) Flowers, she passed away December 8, 2020, in Houston, Mo. She married Kenneth Eugene Wilson on December 5, 1943, and to this union five children were born, Diana, Jim, Don, Marie, and Steve, they then adopted and raised two granddaughters, April, and Mandi.

Frances and her family moved from Oklahoma when she was nine years old to the farm in Rocky Branch. She attended the country school and graduated from Houston High School in 1943. In December she married and moved to Boston where Kenneth was stationed at the Navy base. The couple then transferred to Port Hueneme, Calif., and after Kenneth was discharged from the military, they moved back to Missouri in 1945 to their farm. Frances lived most of her life in the Simmons and Rocky Branch area, and was very active with the farm, community clubs and Simmons Baptist Church. After retiring from Cabool Shoe factory, she took the role of “Granny” to her many babysitting kids.

Frances was a survivor, she came into this world early in the middle of winter weighing only 2 lbs., and this may be the reason for her feisty and tenacious nature. You never had to guess what she was thinking because she would let you know, and you knew how much she loved her family. She was one of a kind and will be remembered for her delicious baked goods, beautiful quilts, green thumb, hospitality and strong spirit.

Whether she was Mom, Grandma, Granny, Sister, Aunt, or Friend, just know we all love you and miss you. We will be comforted knowing your birthday will be a grand celebration as heaven welcomes you.

Memorials are suggested to Rocky Branch Cemetery. Online condolences may be made at www.evansfh.com.