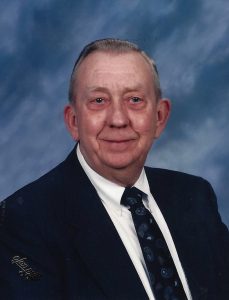 James Louis Mitchell, age 81, was born on April 16, 1939, to Louis Tallmadge Mitchell and Katherine Louise Adams Mitchell in Rolla, Mo. He passed away on December 9, 2020, at his home in Licking, Mo.

James was married to Janett Laverne Willson on April 24, 1964, in Houston, Mo. To this union two sons were born: Mark Willson Mitchell and Michael James Mitchell.

James is survived by his wife, Janett, of the home; two sons, Mark and his wife Melissa of Licking, and Michael and his wife, Molinda of Waynesville; four grandchildren, Evan, Katelyn, Bryan and Allan; a nephew, Ken Martin and his wife Dorina-Bunny Mickle Martin of Folsom, Calif.; along with other extended family members.

James attended Licking public school and graduated in 1957. He then attended Arkansas State Junior College in 1958 and played basketball. James worked for Tucker Dairy in Rolla until being drafted into the U.S. Army, and served from 1962-1964.

James gained employment at Intercounty Electric in 1964, where he worked for 33 years and retired in 1997.

Services for James were Saturday, December 12, 2020, at the Fox Funeral Home in Licking, Mo. with Jim Bobo officiating. Visitation was from noon to 1 p.m. with a funeral service starting at 1 p.m.

The family has requested that donations be made to the Shafer Cemetery or the Fair Haven Children’s Home, in Strafford, Mo. in lieu of flowers. Arrangements entrusted to Fox Funeral Home. Online condolences may be left at www.foxfh.net.