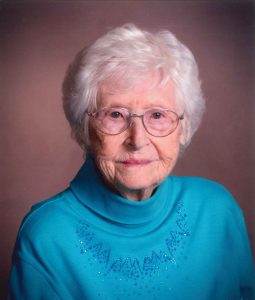 She spent most of her life in Texas County. On March 13, 1940, Helen was married to Claude Laffoon, son of Cecil and Grace Laffoon. Claude preceded her in death on January 7, 1984.

Helen attended Gravel Point School for 10 years, graduated from Houston High School, and Draughons Business College in Springfield. She was employed as an accountant with MO Farmers Association in Houston for four years prior to accepting a position with the Navy Department in Washington D.C., after a short stint in this position she returned to Houston, and accepted a position with the United States Department of Agriculture, division of Farmers Home administration where she remained for 37-3/4-years.

Claude and Helen purchased farms near Houston where they established first a dairy, and then a beef operation. They then established a horse operation, and became known widely on the local, state, and national level. She held offices in the walking horse trainer’s association and saddle club.

She was a member of First Baptist Church of Houston since 1941.

She traveled extensively during her lifetime.

Helen was preceded in death by her husband; her parents; seven brothers: Dillard, Earnest, Clarence, Darrel, Nova, Herschel and Wayne; and two sisters: Bertha Smyer and Esther Reaves. She is survived by nieces and nephews, and a host of friends.

Memorials in lieu of flowers may be made to First Baptist Church. Online condolences may be made at www.evansfh.com.