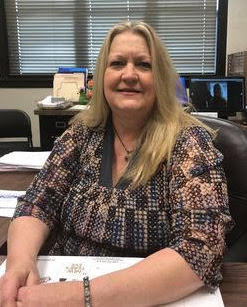 Photo by Shari Harris
Rhonda Kirkwood will fill the position of city clerk for the City of Licking on December 28.

Nearly before it had begun, the search for a new city clerk was over. The Board of Aldermen approved the hiring of Rhonda Kirkwood as the clerk for the City of Licking at their December monthly meeting.

Kirkwood has 11 years of prior experience working with the City, leaving in 1999 to work for the State of Missouri at South Central Correctional Center, then becoming a deputy county clerk for Texas County in 2007. Kirkwood, a 33-year resident of Licking, should be able to put her experiences with local government to work for the city in her new role.

“I feel I have a lot to offer the City at this critical point,” says Kirkwood. “I’m excited to start this new chapter, serving the citizens of my hometown.”

Preserving the history and maintaining what’s been achieved in Licking while looking forward to the future growth of the community are all important to Kirkwood. She will begin her new role on December 28, just in time for 2021.