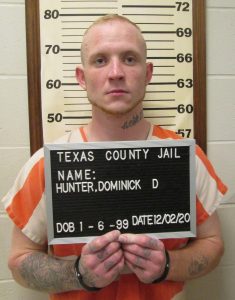 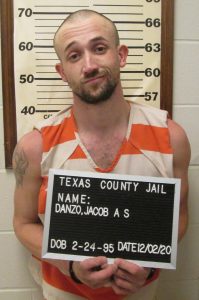 LICKING, Mo. – On Nov. 27, 2020, officers with the Licking Police Department conducted a traffic stop on US Highway 63. The driver, Jacob Danzo (25-year-old male of Licking), was identified and after a search of his person, methamphetamine and suspected ecstasy was located. Danzo was secured in handcuffs and placed in the front seat of the patrol car. While officers were conducting a search of Danzo’s vehicle, Danzo was able to escape from custody and fled from the scene.

On Dec. 2, 2020, Licking police officers were on patrol when they located Danzo and Dominick Hunter (21-year-old male of Licking) driving on Old Salem Road. Officers activated their emergency lights and initiated a traffic stop. Danzo failed to yield to the emergency lights and continued at a high rate of speed. The officers initiated pursuit, which later ended in Dent County on Highway 119. As Danzo and Hunter exited their vehicle, Danzo pointed a .44 Magnum revolver at the officers, and then fled into the nearby wooded area.

A search of the area was conducted and the suspects were located and taken into custody without further incident, approximately one mile south of where the vehicle pursuit ended. Danzo was located with the pistol that he had pointed at the officers and another pistol was located in the suspects’ vehicle.

The charges for which the suspects are being accused of are mere accusations and are not evidence of guilt. Evidence in support of the charges must be present in front of a court of competent jurisdiction, whose duty is to determine guilt or innocence.