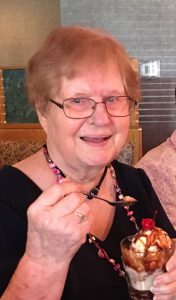 Shirley enjoyed growing up on the Kiser farm two miles west of Success, Mo., playing with her six brothers and sisters and her three cousins, Opal and Hazel and Elmer (Jr.) Harlan.

She attended Gladden School and Gladden Free Will Baptist Church. She graduated at Houston High School in 1941 and married Floyd Buckner in October 1942. She attended SMS in Springfield and taught eleven years in rural schools of Texas County, eighteen years at Licking, then twelve years counseling at Fort Leonard Wood, Mo. She retired in 1984 and operated, with Dale’s help, a dog kennel, raising and selling many breeds of AKC puppies.

She later enjoyed her second retirement in Licking, where she enjoyed going to Boone Creek Baptist Church and Licking Senior Center, crocheting, reading and doing crossword puzzles. Most of all she enjoyed her kids and grandkids.

A service for Shirley was held on Wednesday, December 23, 2020, at 1 p.m. at Fox Funeral Home with Pastor Wayne Carrigan officiating. Visitation was held one hour prior to the service. Interment followed at Boone Creek Cemetery. Arrangements entrusted to Fox Funeral Home. Online condolences may be left at www.foxfh.net.