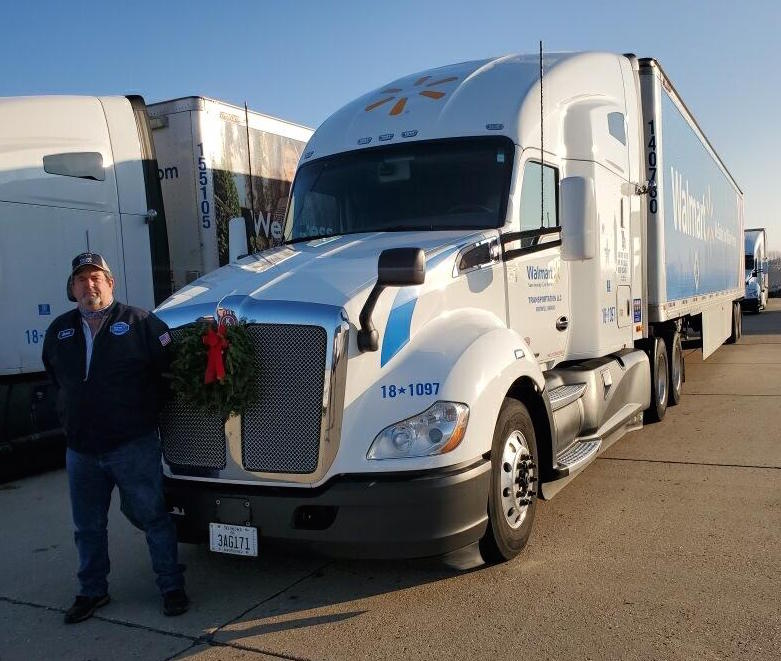 Photos submitted
David Taber stands with his Walmart truck, one of many used to transport the Wreaths Across America memorial wreaths. A transport wreath stays with the drivers and is passed from one to the next until the load reaches its final destination point. A wreath is also mounted to the front of the tractor and stays with the truck; this, in addition to a permanent emblem, designates the tractor as a transporter of the wreaths. Trailer side logos may also designate the trailer as a transporter.

It is only fitting that local veteran David Taber participated in the transport of holiday wreaths destined for military cemeteries in honor of National Wreaths Across America Day, which was held Saturday, Dec. 19.

“This is something I’ve wanted to do for the past six years,” says Taber. “Given the opportunity I would do it again.” Taber works at the Walmart Distribution Center in St. James, which is among the corporate sponsors and trucking partners that participate in the transport of the holiday wreaths. 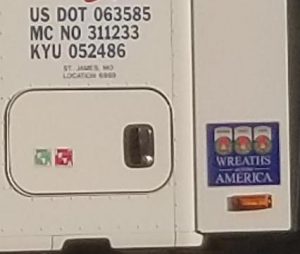 The balsam fir memorial wreaths began their journey in Columbia Falls, Maine, from the Worcester Wreath Company, where Morrill Worcester initiated the non-profit organization in 1992. Drivers and military veterans Taber and Cliff Darcy continued the transport of loads of wreaths from St. James to Bartlesville, Okla.; from there they continued their journey for distribution to military cemeteries. The distribution center held a small ceremony with a convoy escort to I-44 in Rolla.

“There are a large number of military veterans employed at the St. James Distribution Center,” Taber said proudly, “and I had to wait for the honor of participating in the annual transport of the wreaths.”

Taber, who served in the Air Force during Desert Storm, has a family heritage of military service, which includes his grandfather Clark, WWII, great-uncle George, who lost his life serving at Pearl Harbor in WWII, father Jim who served in Vietnam, and many more extended family in numerous branches of the service. His wife Tammy’s family, with surnames Ice, Cook and Hicks, also includes many conflicts and branches.

“As a child and young man, respect for the military, the heritage and the sacrifice were instilled in me. I was taught history, and that if I didn’t participate and promote those values, who would? Heritage and responsibility are handed down, not only in books, but also by example and doing. If I don’t participate and help educate, how can I expect anyone else to?” asks Taber. The Wreaths Across America organization promotes these values. 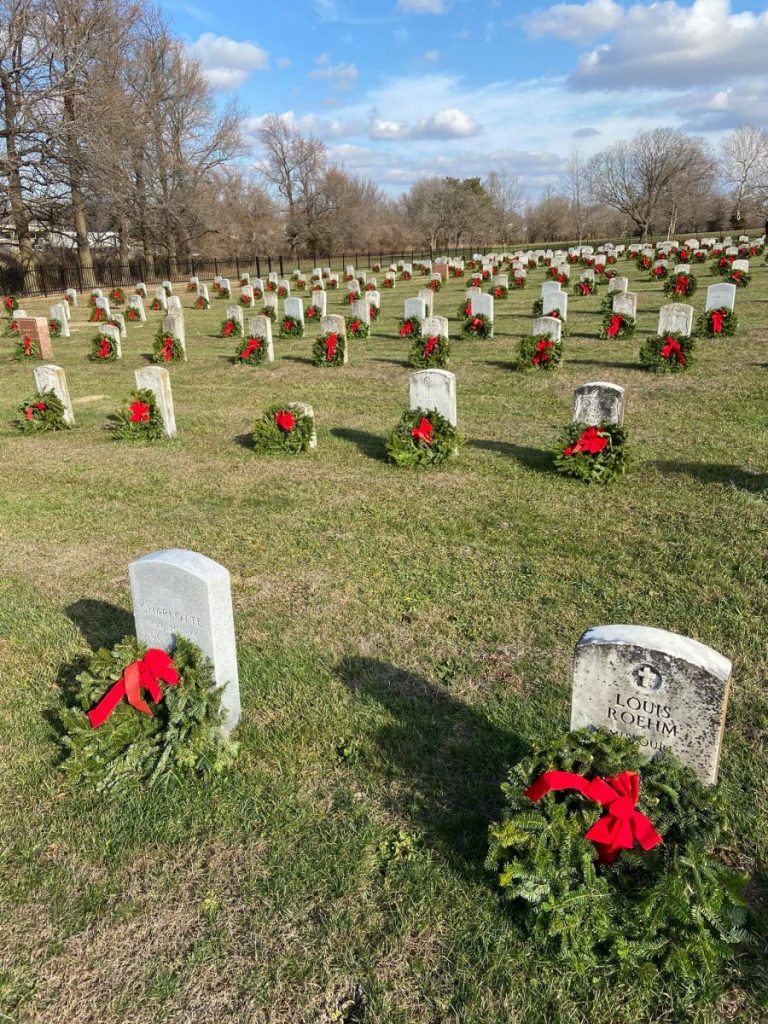 Wreaths Across America promotes Remembering our fallen U.S. veterans, Honoring those who serve, and Teaching children the value of freedom. They coordinate wreath-laying ceremonies at Arlington National Cemetery, as well as at more than 2,500 additional locations in all 50 U.S. states, at sea and abroad, and seek to ensure that every veteran headstone is covered. Locally wreaths are placed at Fort Leonard Wood, St. James Veteran’s Home and many more cemeteries within the state of Missouri. It is held annually on the second or third Saturday of December, as there is no better time to express our appreciation than during the holiday season.

The mission continues throughout the year with the involvement of school, scout, civic and religious groups across the country through fundraising and support that assists these entities in their own goals and projects.

Programs available in support of Wreaths Across America include Wreath Sponsorships, the “Thanks a Million” campaign, learning tools, interactive media projects, opportunities for youth groups to participate in events, the Remembrance Tree Program and the Wreaths Across America Museum. Information on all the programs may be found at www.wreathsacrossamerica.org.

Walmart has participated for 13-years and this year donated the time and expense of 16 tractor trailers and 100 drivers, traveling nearly 40,000 miles and stopping at 40 Distribution Centers for the transport of 100,000 wreaths.