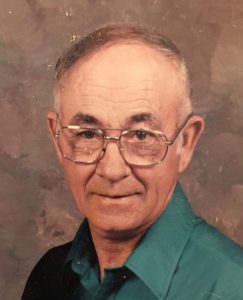 Wayne attended the Yukon School through the seventh grade. After breaking his leg, he stayed home to work on the farm with his mother while his father worked out. He married LaVera Sirdoreus on August 28, 1950, and to this union one son Rick was born. In 1953 he was drafted into the U.S. Army and served two years.

When young, Wayne enjoyed raising and riding Fox trotters and gaited horses. He enjoyed playing horseshoes, cards, dominoes, board games and a good game of Aggravation. He grew an extensive garden, loved decorating for Christmas (and opening his presents early!), and was a die-hard WWE fan. Wayne was a quiet man who enjoyed company, took dedicated care of his wife during her later years, and made the best deviled eggs ever. His grandkids said you could learn as much from what he didn’t say as what he did say.

Wayne worked various jobs over the years, including for his son’s auction business, and retired as a cattle farmer. He attended Praise Assembly and Countryside Worship Churches until his health declined.

Wayne is preceded in death by his wife, LaVera; grandson, Justin; his parents; and all his siblings: Marvin Tilford, Everett, Roscoe, Roy, Troy, Opal, Ruby and Dorothy. He is survived by his son, Rick (Lisa); grandchildren, Josh (Shelbi), Lydia and Tessa; six great grandchildren, Logan, Michael, Rachael, Bristol, Harper and Whitley; sister and brother-in-law, Ina and Jerry Thieman; and numerous nieces and nephews.

He will be missed by all.

In lieu of flowers, Memorials are suggested to Big Creek Cemetery. Online condolences may be made at www.evansfh.com.