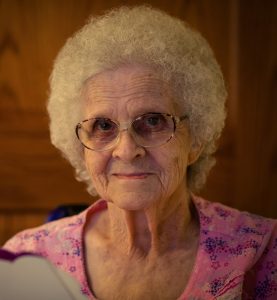 Betty grew up in the Huggins area and attended Oak Grove, Number One (Ballard) and Long Valley elementary schools. After graduation, she was needed to help at home and did not go on to high school. However, she had been an incredibly good student and loved to learn, so later in life, she studied for and took the General Educational Development (GED) tests, and earned a high school diploma.

She worked for a while at the laundry at Fort Leonard Wood. During this time, she met Harmon Eugene Rice, and they were married on February 4, 1954. They lived their entire married life on part of the Rice family farm near Plato, where they raised beef cattle, which provided not only an income but also meat for the table. They kept a few chickens, both for meat and eggs, and usually a dairy cow that provided milk for themselves and others. They always planted a large garden, and Betty became an expert at canning and freezing the produce, as well as fruit that they purchased or picked wild on their farm. She was an excellent cook and was known “far and wide” for her blackberry cobbler!

Betty loved old-time country music, especially the original Carter Family, and had an extensive collection of their recordings. Another special interest was genealogy, and she read and researched tirelessly to piece together her family’s history. She also enjoyed sewing her own clothes and making quilts.

Betty was a member of the Church of God, and she attended services in Rolla until her failing health prevented it.

She was preceded in death by her husband; her parents; two brothers: Raymond Albert Frey and Paul Douglas Frey; and two sisters: Lillian Laveta Frey and Pauline Lucille Frey.

Services are scheduled to be at the Evans Funeral Home with Mr. John Foster officiating. Burial will be in the Number One Cemetery near Huggins.

In lieu of flowers, memorials may be made to the Number One Cemetery.

Online condolences can be sent to www.evansfh.com.