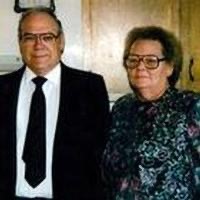 At 16 years old, he traveled all over the U.S. and worked at various jobs until he went into the Air Force in 1949. He was stationed in Alaska during the Korean War.

Soon after his discharge, he met and married the love of his life, Ida Louise Bates. They raised three children together.

He went to night school while working full time as a mechanic. He received a degree in Supervision and Tool and Die Making.

He began attending church at 17th Avenue Missionary Baptist Church in Melrose Park, Ill. Following his wife, he accepted the Lord as his Savior on September 20, 1970.

He surrendered to preach in 1972, filling pulpits for a while until he was called to pastor Landmark Missionary Baptist Church in Oswego, Ill. He was ordained in 1973. He pastored five churches over the years. He said it was an honor to lead his youngest daughter to the Lord and then baptize her in 1974. He had the honor of leading many souls to be saved in his 50 years of service to the Lord.

He retired as pastor of Tenth Street Baptist Church in Rolla, Mo. about 5 years ago, but continued as Interim Pastor until early November 2020.

He loved to hunt and fish, but even more he loved to serve God. The love he had for God and family, including his church family, knew no bounds.

On December 22, 2020, he came home from the hospital, and left for his heavenly home where he wanted to be. He was surrounded by loved ones.

He was preceded in death by his parents; his older brothers, Francis and Melvin; his oldest daughter, Mary; and his beloved wife, Louise.

He is survived by his son, Billy and wife Maria of Tucson, Ariz.; his daughter, Brenda Wilson and husband Mickey of Licking; 10 grandchildren; over 25 great-grandchildren; and many nieces and nephews.

He will be missed by all of us.

Memorials are suggested to Ellis Prairie Cemetery. You may send an online condolence to www.evansfh.com.