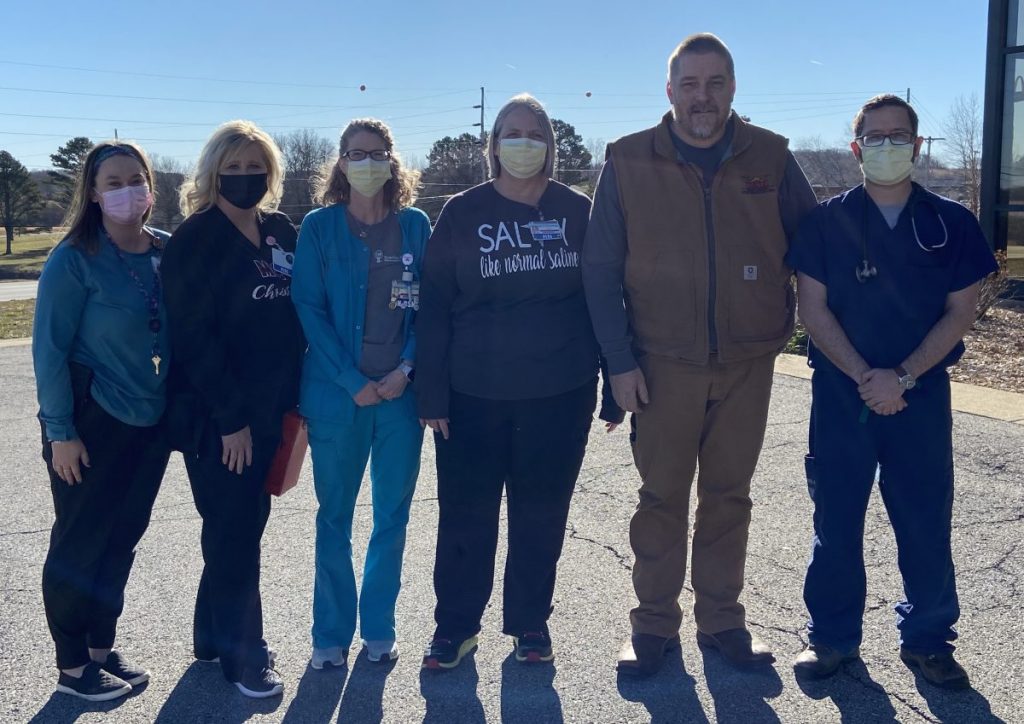 Photo submitted
A few members of the TCMH staff who provided care to Shain Zundel prior to his transfer to the University of Iowa. From left, Jenn Capender, RN; Mandy Pender, RN; Amy Mills, RN; Carol Turner, RN; Zundel and Dr. Matthew Brown.

HOUSTON, Mo. – Texas County Memorial Hospital staff received gratitude and appreciation from an area patient and his family for the vital role they played in helping to save his life. Shain Zundel of Mtn. Grove, his wife Tessa, and their five children were able to spend the holidays together as a family, thanks to the relentless efforts of the hospital staff to get Zundel the specialized care that he needed, in just the nick of time.

When Zundel arrived at TCMH on November 9 he was already unconscious. Zundel had been experiencing ongoing headaches that continued to worsen, prompting the emergency trip to his local hospital.

In no time at all, the hospital staff had performed a CT scan and discovered that Zundel had a mass in his brain and that he needed a neurosurgeon as soon as possible.

The staff at TCMH worked tirelessly to try to find an open bed for Zundel at a larger hospital so that he could receive the immediate brain surgery that he needed. All together the staff made 59 phone calls across seven different states before they found a facility that could accept him.

Zundel spent almost 24-hours at TCMH before he was transported by ambulance to Fort Leonard Wood where a private plane awaited him. From there, Zundel was flown to Iowa City, Iowa, where Dr. Matthew Howard and the neurosurgery team at the University of Iowa were preparing for him.

Zundel has recovered remarkably from his brain surgery for what was discovered to be a rapidly advancing infection from dental bacteria.

According to Howard, Zundel’s case was a very close one. If his care would have been delayed even 30 more minutes, Zundel’s story might have had a much different outcome.

Zundel does not have any recollection from the time he spent at TCMH, but he explained that his wife could literally “feel” the prayers for him and his family during their journey.

“I didn’t remember anything that had happened to me until they pulled the ventilator,” Zundel shared with TCMH staff when he personally thanked them in the hospital parking lot.

“I was only in the ICU for one day and they pulled the vent in less than 24-hours. I was moved to med surg for four days, and then I got to go home,” Zundel said. “I have just gotten stronger and stronger every single day.”

“You worked so hard for me,” Zundel said. “Everything you do for everybody every single day is important.”

Zundel encouraged the hospital staff to keep doing great work, even though he knows it can become tiresome and some days feels unsuccessful.

“You touch hearts and you touch lives and I am here today because of that,” Zundel said.

“I am here because you all fought so hard to find me a place that would be able to “brain wash” me,” Zundel said with a chuckle.

“I have a beautiful scar and a section of my scull missing, but it is now a reminder every single day of the blessings that God has given me and the miracles in my life,” Zundel said.

Zundel expressed that all of the staff at TCMH are a miracle in his life.

“Thank you so much for everything that you have done and for what you do every single day,” Zundel said. “I am very grateful to know you all and my family thanks you too.”

“My wife said that we needed to send out “thank you” cards and I am so glad that she did,” Zundel said.

“My hope is that our thoughtfulness for what all of you guys have done will spread so that other people will see it and share their thankfulness with others,” Zundel said. “It is so important to be grateful every single day for what we are blessed with.”

“I am so grateful to be able to stand here to tell you that I am thankful for each and every one of you,” Zundel said. “Thank you very much!”

Zundel explained that it was not until just a few weeks ago that he could even use a cell phone.

“I couldn’t figure it out because not everything was firing correctly,” Zundel said. “My strength has come back so quickly and I too, could feel everyone’s prayers.”

“While I was in Iowa, they took me through the dental clinic and found that I had all my own teeth and that I had never had a filling. They figured out that there was nothing wrong there because I had perfect teeth,” Zundel explained.

“The doctors are still scratching their heads about how the dental bacteria ended up inside my brain,” Zundel said. “They couldn’t figure out how it would have got in there because it is a closed system.”

“I think God allowed me to go through this because I am a different man because of it,” Zundel said. “He is watching over you all too.”

After Zundel received his brain surgery, he was able to return to his work after only about six weeks off. The staff at TCMH are very thankful for such a positive ending to the scary and uncertain experience that the Zundel family had to go through.