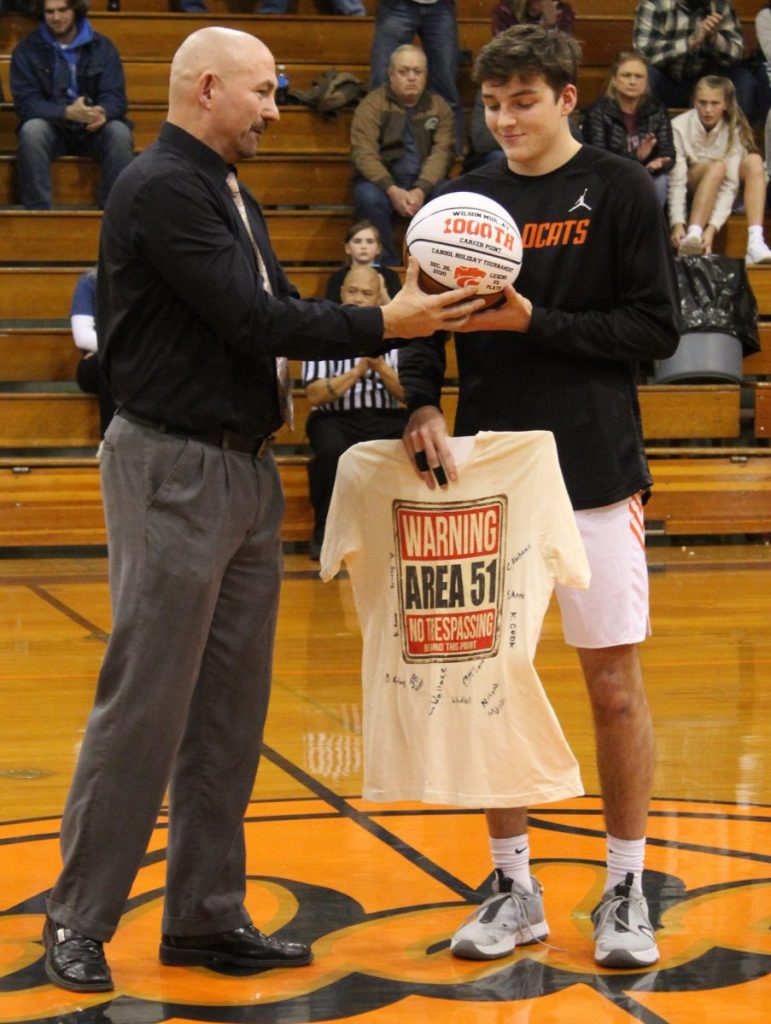 Photo by Shari Harris
Senior Wilson Murray was recognized between games for 1000 career points as a varsity Wildcat and for scoring 51-points against Houston.

The Licking Wildcats met the Mountain Grove Panthers Tuesday, Jan. 12, in what has become a traditionally close and hard-fought game.

Junior Varsity began the evening, but fell to the Panthers, 68-75.

LHS Principal Jarad Rinne called Coach Jess Ross and senior Wilson Murray to center court, before the warm-ups for the Varsity game began. Coach Ross first presented Murray with a signed t-shirt commemorating his 51-point game against the Houston Tigers on Nov. 23. Then Murray received his 1000-point ball, in honor of surpassing the milestone in career scoring as a varsity Wildcat. Murray achieved this accomplishment on Dec. 26 in the Cabool Holiday Tournament versus Plato.

The varsity game saw the Wildcats fall behind in the first half, but they rallied to close the gap to two points, 25-27, with an inbounds pass to Murray who tipped it in with .8 seconds on the clock.

The Wildcats entered the fourth quarter with a 41-34 point lead, but the Panthers wouldn’t go down easily, clawing back to take the lead. A tie with 6.7 seconds on the clock had fans on the edge of their seat. Mtn. Grove hit a free throw, taking the lead, but Murray at the buzzer again scored, this time connecting for three to take the Wildcats to a 57-55 victory.

The Wildcats start the St. James Varsity Tournament this week.

The Lady ‘Cats travelled to Laquey Thursday to face the Lady Hornets. No JV game was played, and the Licking Varsity ladies left no doubt as they scored 53 points to Laquey’s 17.

The Varsity Lady ‘Cats will play in the Logan-Rogersville Tournament this week. Junior varsity will compete in a round robin Junior Varsity tournament that runs concurrently.