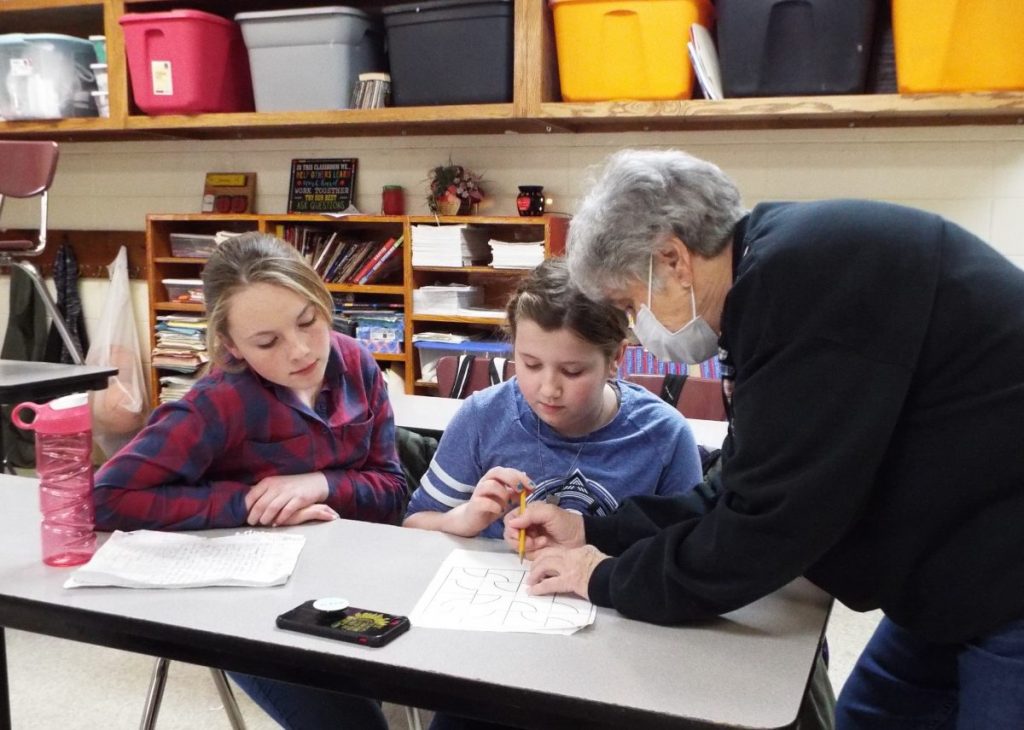 Photo by Christy Porter
From left, Lily Godi and Ava Walker are paying close attention as mentor Carolyn Wulff explains the mechanics of a quilt pattern they’ll be making for the 2027 Underground Railroad Quilt.

A hands-on experience of multi-dimensional learning of history has begun with Licking R-VIII sixth grade students in Michelle Meizler’s social studies class. The graduating class of 2027 is currently studying the Civil War in their classroom setting. They are taking the lessons a step further by stitching a piece of the history of slavery, a component of the conflict, and are creating an Underground Railroad Quilt as a voluntary, after-school project.

The 28 excited volunteer students will completely hand-piece approximately 14 quilt blocks, which when set together and completed will be a sampler quilt. Beginning on January 11, 14 students work on their blocks on Monday afternoons and 14 on Wednesday afternoons, in groups of two or three students. The quilt, along with documentation of their experience and history and pictures of the quilt blocks, will be auctioned off the students’ senior year, 2027, as a fund-raiser for the Texas County Museum of Art & History.

Meizler commented on this year’s student volunteers. “The kids that volunteered this year like challenges; they have displayed that above-and-beyond attitude in class as well. And this is our biggest volunteer class yet.”

Previous years’ quilts were displayed for the kids to see what their completed project would resemble and also to let them see what the block selections looked like in fabric. After an explanation of expectations and directions by Meizler, the students began the project.

Helping them with this sizable project are several experienced volunteers, including Suzanne Blackburn, Margaret Burch, Jackie Duncan, Reggie Ward and Carolyn Wulff. These mentors will likely be teaching some of the students basic sewing skills as well.

“I want to learn to sew,” said student Hannah Beasley, as she and Kylee Rinne chose a quilt pattern and the vintage fabric to create it. “It looks really fun and challenging, and we like challenges,” shared the two.

The students could choose from 14 – 15 different quilt block patterns, of varying degrees of difficulty, each having a particular significance in the history of the Underground Railroad Quilt. 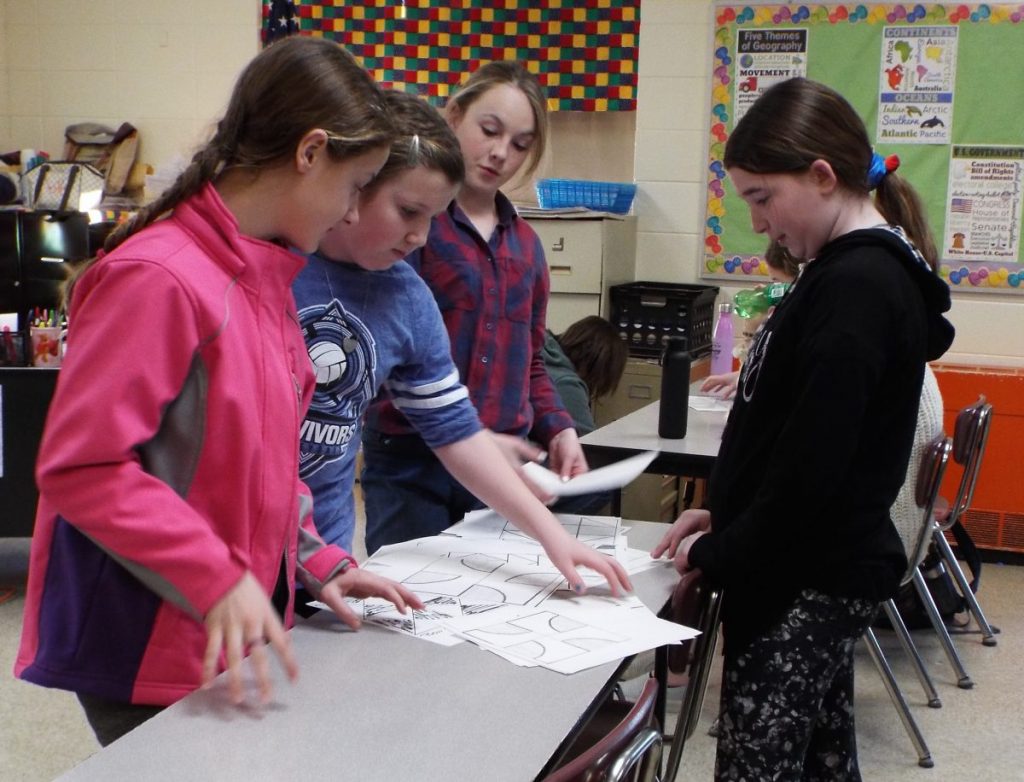 Photo by Christy Porter
Keeping in mind all the criteria for the making of a quilt block, from left: Keely Gorman, Ava Walker, Lily Godi and Taylor Hicks sort through the pattern choices.

Carolyn Wulff took time to explain what a particular quilt pattern would mean to an enslaved person looking for direction. She explained to Beasley and Rinne that one set of “geese” being a different fabric print in a block of the “Flying Geese” would be the telling sign of which direction to go, i.e., north. Having the explanations involved the students in their selection of a quilt pattern. Out of curiosity, some students went to the computer to see what a completed quilt of their block selection looked like.

Then the tubs of fabric scraps came out and much discussion transpired among the students about color, print, and the appropriateness of both for the time period of an Underground Railroad Quilt. The students were selective in their color choices and were conscientious of the compatibility. River Vestal and Conway Adey chose a green solid, a floral print and black, saying, “We like the way the green ‘pops’ with the floral.” 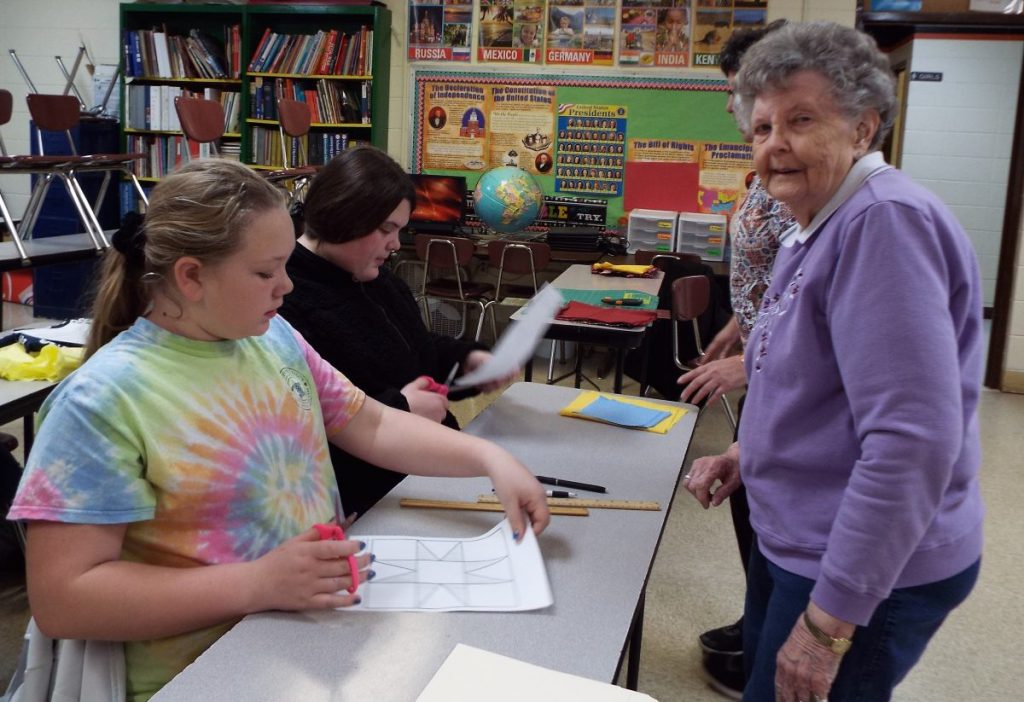 Learning about the blocks, the difficulty of the blocks, and their fabric selections prompted some students to change their selection throughout the course of the class.

With the help of the mentors, some started making their cardboard pattern pieces and cutting the fabric they would be using. 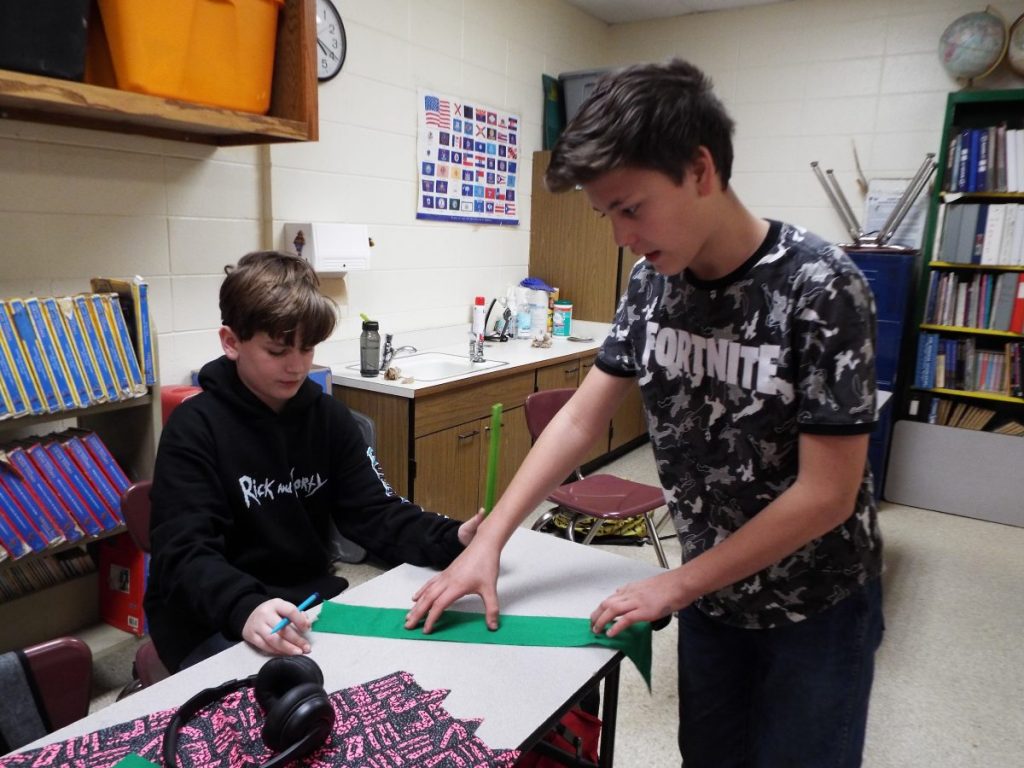 Photo by Christy Porter
Working together as they begin the assembly of their quilt block is Cayd Evans (left) and David Wogoman (right).

“I do the detail,” said Caydn Evans, as he drew out the cardboard pattern.

“I do the cutting,” said David Wogoman, displaying the teamwork that is desired with this project.

Sewing the fabric pieces together started this week.

“It’s good to see them so excited,” said Reggie Ward.

The quilt blocks will be set together and quilted by a volunteer when they have been completed.