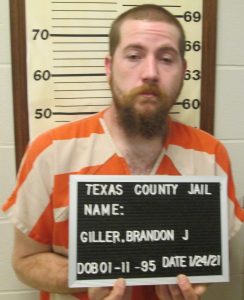 On Jan. 24, 2021, a Licking police officer observed Brandon J.L. Giller operating a green-in-color Jeep Cherokee, traveling southbound on South Main Street. The officer had prior knowledge of seven active arrest warrants for Giller. The officer activated his emergency lights and siren to initiate a traffic stop. Giller accelerated the vehicle and proceeded to flee from the officer. The officer initiated a pursuit and followed Giller south, out of the city of Licking.

During the pursuit, Giller led the Licking police officer down multiple Texas County gravel roads, including Sackett Road. While on Sackett Road, Giller came to a sudden stop and proceeded to attempt to back into the pursuing Licking police vehicle. The Licking police officer was able to avoid contact between the two vehicles by quickly backing away. Giller was able to turn his vehicle around in the roadway and proceeded to travel towards the officer, narrowly missing the patrol vehicle. Giller continued to flee on Sackett Road to Amburn Road. While making the turn onto Amburn Road, Giller failed to negotiate the turn and ran the vehicle off into the ditch, where his vehicle sustained damages causing it to become inoperable.

Careless and Imprudent Driving – Misdemeanor, and