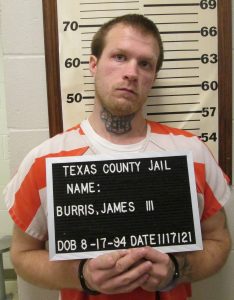 On January 17, 2021, Texas County Deputies responded to residence on E Highway for a theft report involving a car battery. During the investigation information was developed that a suspect might be at a residence in Licking. Deputies along with an officer from the Licking Police Department went to a residence on Kirk Street. James Burris, III, was located hiding under a bed inside the residence, and arrested. The stolen car battery was also recovered.

Burris was transported to the Texas County Jail. During the jail booking process a bag containing tobacco, marijuana, and a lighter wrapped in latex gloves was located on his person.

James Burris, III, age 26, of Licking, was arrested on a felony Texas County warrant charging him with Stealing. Burris was held in the Texas County Jail on a $100,000 bond. A probable cause statement seeking additional charges for the prohibited items in the jail will be submitted to the Texas County Prosecuting Attorney.