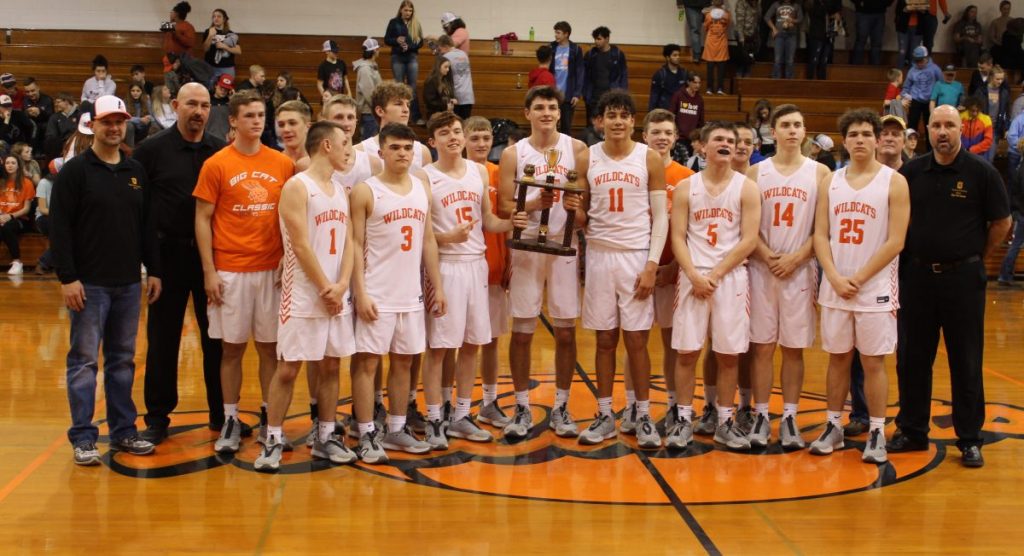 Photo by Shari Harris
The Licking Wildcats were awarded the Big Cat Classic Trophy after their win over Salem on Friday. The Classic is sponsored annually by Town & Country Bank and was presented by representatives of both the Licking and Salem branches.

Both the Lady ‘Cats and the Wildcats brought home the Big Cat Classic trophies this year, defeating the Salem Tigers in the annual contests.

Photo by Shari Harris
The Licking Lady Wildcats were awarded the Big Cat Classic Trophy after their win over Salem on Tuesday, Jan. 26. Each town hosted one of the games, with the girls’ game held in Salem this year.

The Lady ‘Cats faced Salem in Tiger Country Tuesday, and came away with a 56-52 victory and the trophy. Junior varsity also scored one in the win column, with a convincing 38-13 score.

This was the second win in two days for both girls’ teams. The Crocker Lions fell to the JV Lady ‘Cats 57-22 and Varsity racked up 52 points to the Lions’ 23.

The Wildcats played their half of the Big Cat Classic Friday during the Homecoming Game.

Junior varsity started the evening with a tight contest against the Tigers. The 29-27 lead at halftime was a good indication of what the second half would bring. A 42-42 tie with 2:50 remaining in the fourth quarter was broken when Licking’s Austin James hit two from the foul line. Salem hit for two, then went ahead, making both shots of a 1-and-1. The Tigers took a five-point lead after connecting with a three-pointer, and Licking called time-out. James and Silas Antle were good on the free throw line, adding two apiece to pull within a point with 1:23 to go. Missed free throws by Licking in the final minute lost the ‘Cats the opportunity to recapture the lead. Salem connected with one more free throw with 6.1 seconds remaining, and Licking found itself on the losing end of the 48-50 final score.

After the Homecoming Coronation, the Varsity Wildcats came out ready for a win. Cadrian Hutsell and Briana Link sang the National Anthem, and then it was down to business. The Wildcats amassed a 23-14 lead at the end of one, and built it into a 16-point difference by the half, 38-22.

The cheer team entertained the crowd with their cowgirl dancing at halftime, and bidders in the Booster Club Silent Auction checked the lists for their favorite baked goods.

The Tigers fought back in the third, closing the gap to 48-45. Early in the final quarter, Salem pulled even to the ‘Cats. But Coach Ross restored the focus to his team and they began to pull ahead again. Licking led 65-55 with two minutes remaining and maintained a comfortable lead to the end, winning 71-58 over the Salem Tigers.