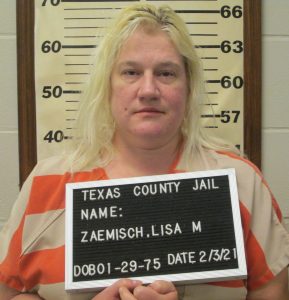 On the evening of February 3, 2021, Texas County Deputies responded to a residence on AP Highway in the Success area for a report of an assault involving an ax. A male victim was transported to Texas County Memorial Hospital by private vehicle with non-life-threatening injuries. The male reported being struck by a “battle ax” wielded by a female later identified as Lisa Zaemisch during an argument at the residence. Deputies located Zaemisch concealing herself in the residence along with the weapon and other evidence consistent with the alleged assault. Zaemisch was arrested and transported to the Texas County Jail.