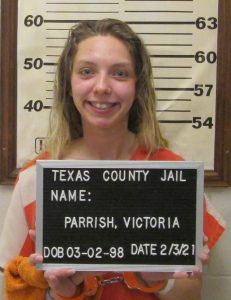 On February 3, 2021, at approximately 4:06 a.m., the Licking Police Department received a report of a stolen vehicle from the Shell Corner Express store, located a 205 US Highway 63.

During the investigation, officers determined Eric Wall was operating a 2016 Ford Escape and he had stopped at the Licking business to purchase gasoline. While Wall was inside the store paying for the fuel, his passenger, Victoria Summer Love Parrish, switched to the driver’s seat and drove away, without consent to operate the vehicle from the owner, and left Wall at the scene. Officers were able to obtain video footage of the theft as well as witness testimony confirming the allegations.

With the assistance of the Phelps County Sheriff’s Department, Parrish and the stolen vehicle were located at her residence, located on State Route K, in Phelps County. The vehicle was returned to owner, at the scene, and Parrish was transported to the Texas County Jail where she was held on a twenty-four-hour investigative hold, pending the application of an arrest warrant.

Victoria Summer Love Parrish, age 22, of Beulah, Mo., has been charged with 1st Degree Tampering with a Motor Vehicle.

The charges for which the suspects are being accused of are mere accusations and are not evidence of guilt. Evidence in support of the charges must be presented in front of a court of competent jurisdiction, whose duty is to determine guilt or innocence.