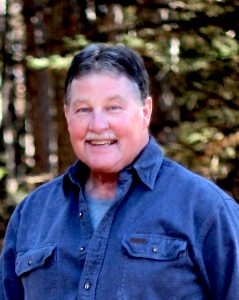 Jim was born in Minneapolis to Devello and Kathleen (Smith) Hugger. He grew up in St. Louis, but loved trips to the country with his dad to hunt or fish. In 1977, Jim married the love of his life, Tammy (Hild), and they moved to Licking, Mo., where he managed Big Piney River Resort. Jim later was a member of the rural volunteer fire department, and he worked as the manufacturing art director for Rawlings Sporting Goods. When that plant closed, Jim earned his Missouri teacher certification and began what he viewed as his most rewarding job, teaching students in the Bridges alternative high school.

Jim loved the woods and working on his farm. He played cribbage any time he found a willing partner, and if you didn’t know the game, he’d teach you. Jim never met a stranger; he let every person he came in contact with know that they were important, worthy, and special. He loved spending time with people, particularly when it also involved anything outdoors – and he fostered many annual traditions for friends, family, and Rawlings colleagues, including float trips, campouts, fishing adventures and hunting camps. He was a devoted caregiver to his mother during her final years and a doting ‘PaPa’ to his grandbabies during his.

A memorial service for immediate family will be held at Ascension Catholic Church on Feb. 27. Memorial contributions can be made by an act of kindness in his honor during these difficult times; the Multiple Myeloma Research Foundation (https://give.themmrf.org/jimhugger), whose work supported Jim’s medical care; or G-Ma Pam’s Rack Pack, a charity that helps cancer patients in the Licking area.