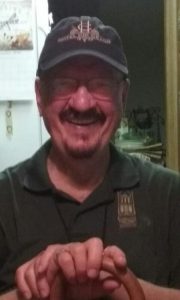 He was preceded in death by his parents; stepfather; sister, Janet Gail LaChance; brother, Ronald Phares; and his life-long friend and partner, Ralph Huesing.

Vernon was a retired teacher from Riverview Gardens School, St Louis, where he taught Social Studies. He received his master’s degree in education at Washington University, St Louis.

He previously lived in Clarksville, Mo. where he and Ralph owned several antique shops. Vernon retired to Green Valley, Ariz., where he became very active in the Episcopal Church and served as a lay reader. He returned to Missouri and moved to Licking to be near his family.

Vernon was a “Renaissance” man; he loved classical music, going to the opera, reading, artwork, putting puzzles together, and hiking at his summer home in Ouray, Colo.

He will be greatly missed by his family, his cat, and many special friends; Carolyn Morehead, Bob (Sharon) Bush, Betty Pennington, Bertha Mae Taylor, Bob (Peggy) Watkins, Brenda Phares, Mary Ward and many others.