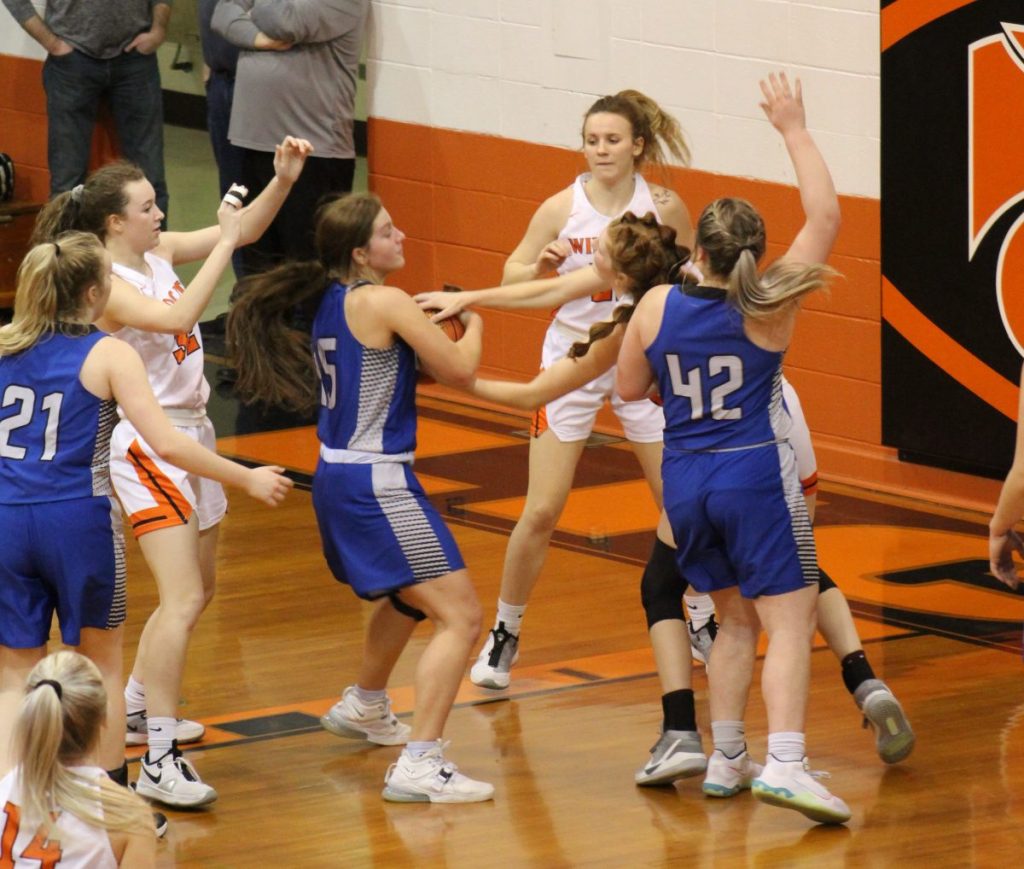 Photo by Shari Harris
The Lady ‘Cats’ aggressive play kept them in the lead throughout the Cabool game.

The Licking Lady Wildcats entered the semifinal round of districts after a first round bye, facing Texas County rival Cabool. Cabool scored first, but the 0-2 score was the only lead they enjoyed during the game. Winter Murray’s three-point shot put the Lady ‘Cats up 3-2 and they never looked back, leading 18-6 at the end of the first. The second quarter saw nearly equal scoring, with a 29-16 halftime score.

Third quarter, Licking came out determined to put the game away, and their lead allowed significant floor time for the bench. Cabool was never able to close the gap and Licking earned a berth in District finals with a 56-45 win.

District finals were held in Dixon this year, and the Lady ‘Cats faced Steelville on Friday, Feb. 26. Steelville’s boys team had clinched the District title the evening before, and their girls were aiming to do the same. Licking was hoping to avenge a loss to Steelville earlier in the season and make another run into the State tournament.

Steals and other turnovers were an issue throughout the game. Lady ‘Cat fans, used to seeing their team stealing the ball multiple times in a game, saw a similar style of play in the Steelville Lady Cardinals. The Lady ‘Cats never hit their stride and trailed throughout the game.

The first quarter saw tough defense on both sides, and the 7-10 score at the end of one showed it. But the second quarter saw Steelville gain momentum, and the Lady ‘Cats trailed by ten at the half, 11-21.

Licking never gave up, scoring 9 points to Steelville’s 13 in the third, and outscoring the Lady Cardinals 17-16 in the fourth quarter, but it wasn’t enough, and the Lady ‘Cats ended their season with a 37-50 final score.

The Lady ‘Cats had a successful season, giving fans plenty of reasons to express their pride in their team. They finished 18-9 and remain a formidable force in high school girls basketball.