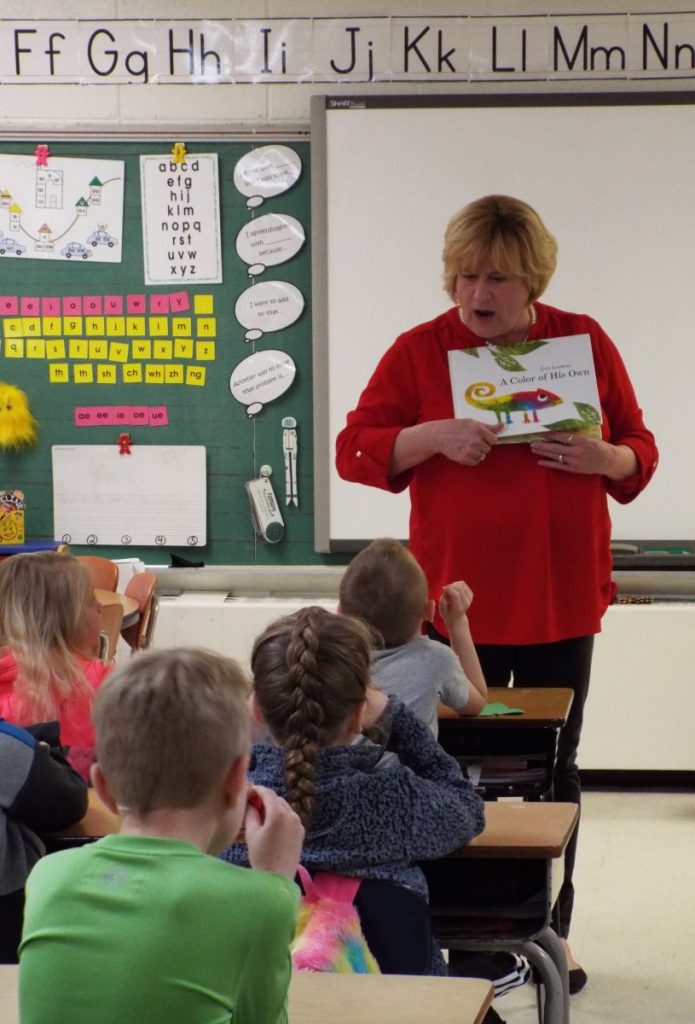 Photo by Christy Porter
Missouri State Senator Karla Eslinger read “A Color of His Own” to first grade students when she visited Licking on Wednesday.

Missouri Senator Karla Eslinger visited with youth and adults alike in Licking on Wed., March 17. Her first stop was by invitation from LR-VIII first grade teacher Telena Haneline. Mrs. Haneline extended the invitation for Sen. Eslinger to read aloud to her students, which was graciously accepted.

Eslinger, whose educational career began in Theodosia, Mo., in a classroom with two rows of first grade students and two rows of second grade students, kept the students and the adults engaged. Eslinger read the story “A Color of His Own” by Leo Lionni, which was selected for her by granddaughter Ellie. The first graders enjoyed the story about a chameleon searching for his own color.

In a question and answer session, the children enjoyed answering Sen. Eslinger’s questions, and she theirs. When asked about how to better get along with people, Eslinger answered, “The best way to get along and work together is to listen very carefully to what others are saying. It’s okay to not think the same way. But when you listen carefully, you both learn something new.” Her response to what she did was, “Helping people, together with others, so we can solve problems together. And the Missouri Senate makes laws to keep everyone safe.” She even observed their experiences first hand, in that many class members were missing their front teeth. The students were the recipients of handheld Missouri State flags distributed by Eslinger’s Chief of Staff Dan Engemann and elementary principal Brad Cooper. Before departing the class, Eslinger said, “You guys are fantastic!” To which they replied, “Thank you Mrs. Eslinger!”

The visitors and staff were then escorted to the Agricultural Department at the high school where teacher Mr. Van Kirkwood shared the educational instruction and the future aspirations of his students. Completing the Licking R-VIII visit, The Cat’s Meow with Brianna Link performed a capella beautifully.

The Licking Senior Center also very much enjoyed a visit from Sen. Eslinger. She talked with several patrons and volunteers at the center, including Lou Swaringim, who celebrated her 97th birthday on Sunday. The senator noted the Veteran’s Wall and learned about some of the military servicemen with Licking connections. Eslinger also checked out the senior center membership wall. Before and after sharing a delicious roast beef lunch, she played some games of ping-pong with some of our citizens. The senior center was gifted new Missouri State and United States flags that will be proudly displayed in the future.

Before proceeding with her itinerary to Houston, Eslinger stopped by The Licking News office where she happily shared, “Constituent service is my favorite thing.”