According to the Revised Statutes of Missouri, RSMo Section 79.110, mayor and board duties are: The mayor and board of aldermen of each city governed by this chapter shall have the care, management and control of the city and its finances, and shall have power to enact and ordain any and all ordinances not repugnant to the constitution and laws of this state, and such as they shall deem expedient for the good government of the city, the preservation of peace and good order, the benefit of trade and commerce and the health of the inhabitants thereof, and such other ordinances, rules and regulations as may be deemed necessary to carry such powers into effect, and to alter, modify or repeal the same.

There is one incumbent and one candidate running for Alderman Ward I, this is for a two-year term with one vacancy. 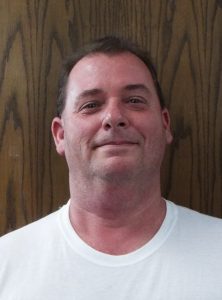 Incumbent Danny Wade has served as a City of Licking alderman in Ward I for eight years. The Licking native is running to continue his service to the community for another two-year term on the April 6 ballot. His tenure with the city has included working with two different mayors, Linda Miller his first two terms and Keith Cantrell his past two terms.

“I get along with people real well, I’m a people person,” says Wade, “I listen to people and share their comments with the board. Then, with the board, we try to resolve any issues.”

Wade summarized that the Board of Aldermen must make decisions about the financial aspects of the community; this includes tax dollars and grants. They must prioritize for what those dollars will be allocated, and how much of those dollars will be spent per issue. The board must always be continuing to address citizen concerns and be open to ideas that will make our city a better place to live, educate and work.

Looking into the future, the water and sewer needs must be met. Wade is hopeful that some sought-after grants will be available within the next year to help address these needs. He is also optimistic that discussions currently taking place with the board will expedite the clean up of several homes within the city limits. The third much-discussed item is recreation choices for the children of Licking, such as a skate park, and financing options to make that possible.

Wade brings to the board the perspective of both a community member and a small business owner. Wade Flooring & Remodeling and the Carnival of Freaks entertainment venue keep him busy when not tending the city’s business.

While describing himself as typically easygoing, Wade is dedicated to getting things done for the city. “Deal with it and move on,” is the progressive motto by which he lives. 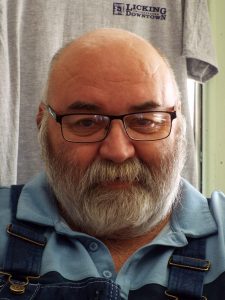 Kenneth Lewis is a candidate for City of Licking alderman in Ward I. He has been a resident of Licking his entire life and has a vested interest in this community, as he and his wife Kelley are the parents of three boys and have nine grandchildren in Licking.

Lewis recognizes that a solid work base is needed for a community to thrive and grow, and says that, as a citizen, he has sought out and shared city information with people in industry and manufacturing in hopes of bringing them here. “I would like to see our town grow with more businesses and jobs,” shared Lewis.

He enjoys working with people and has done so as an ordained minister for almost 24-years. Sharing his calling has taken him from the St. Louis area down to Arkansas. While working for 11-1/2-years as a manager with Ward Rentals, inclusive of storage units and rental homes, an interest in city government and activities was piqued.

While taxes are necessary to fund city government, Lewis is adamant about seeking grants and funding to help provide additional recreational activities for the kids of the community. “We need safe and good recreation for our young people; I would like to see a recreation center and also more community activities with local musicians, carry-in dinners and things of that sort,” said Lewis. 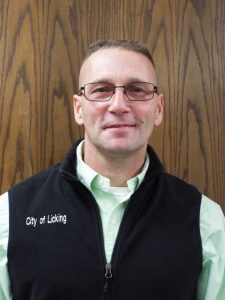 Incumbent for Alderman Ward II Erin McConnell is running non-contested for a two-year term. McConnell was sworn into office on Dec. 22, 2020, during a special session of the Licking Board of Aldermen meeting to fill the vacancy created with the resignation of Alderman Greg Green, when he moved outside of the city limits.

Thus far, McConnell said serving on the council has broadened his understanding of Alderman service and their responsibility to the community. It has also given him a deeper appreciation for those willing to serve in city positions, paid and volunteer, including the mayor, city officials, Chief Burton, our police officers, volunteer fire fighters and city crew managers, also local business owners, church organizations, the community help center, the senior center, the Ministerial Alliance, other charitable organizations, and the good citizens that are keeping the community thriving.

Every person in a community has a vested interest in the corporate health and well-being of its members, and is therefore a shareholder. “There must be a shared responsibility by citizens of all ages and businesses for community success and survival, and to ensure our children have a future here. It is more productive to offer solutions when presenting problems,” states McConnell. “We must create contributors and bring people together with limited resources and individual or collective strengths with no bias. This increases the survivability and sustainability of the collective group resulting in a cooperative of prosperity. The total value is made visible in each individual success…helping one another, like in the settling of the west, where people came together and pooled their resources to survive.

“I care about the people and the community and will make decisions based on that concern and my values. I see my purpose as an Alderman to preserve the positive attributes that make our community special, such as conservative Christian values that invite us to love our neighbor as ourselves and to negate the changes that would subtract from the beauty of our community.”

McConnell has been a member of the Licking community for approximately 20 years. Originally from a rural river community, he shares that Licking has all his childhood attributes and values but an even closer sense of community. “Small communities like Licking have a slower pace, not because we’re slow, but because we appreciate the life we have here,” says McConnell.

McConnell is pastor at Licking Pentecostal Holiness Church. His wife, Isobel, is a Licking native and volunteers at the United Community Help Center with her mother, Terry Snelling. They have three sons, Christopher and wife Charissa (ChaCha); James, a Resource Officer in Plato who also volunteers with the LPD, and wife Tammy, all of Licking; son Christian who is with the St. Louis Police Department; and three, awaiting the fourth, grandchildren. Their sons and a niece, Isobel, who is a daughter of the home and the heart, all graduated from Licking High School.

He is also the owner of McConnell & Sons Concrete. Within the correctional setting at SCCC, he has been a First Aid/CPR instructor, hostage negotiator, firearms and defensive tactics instructor, an armory officer and an advocate for those who have suffered abuse. McConnell is the President of the Licking Ministerial Alliance, a member of Bikers for Christ, a motorcycle ministry group, and he also volunteers with the Sons of Thunder, a motorcycle prison ministry group.

All candidates state that they are willing to provide constituency and advocacy services, as well as support for the community.

Your vote counts; go vote in the General Elections on Tuesday, April 6!