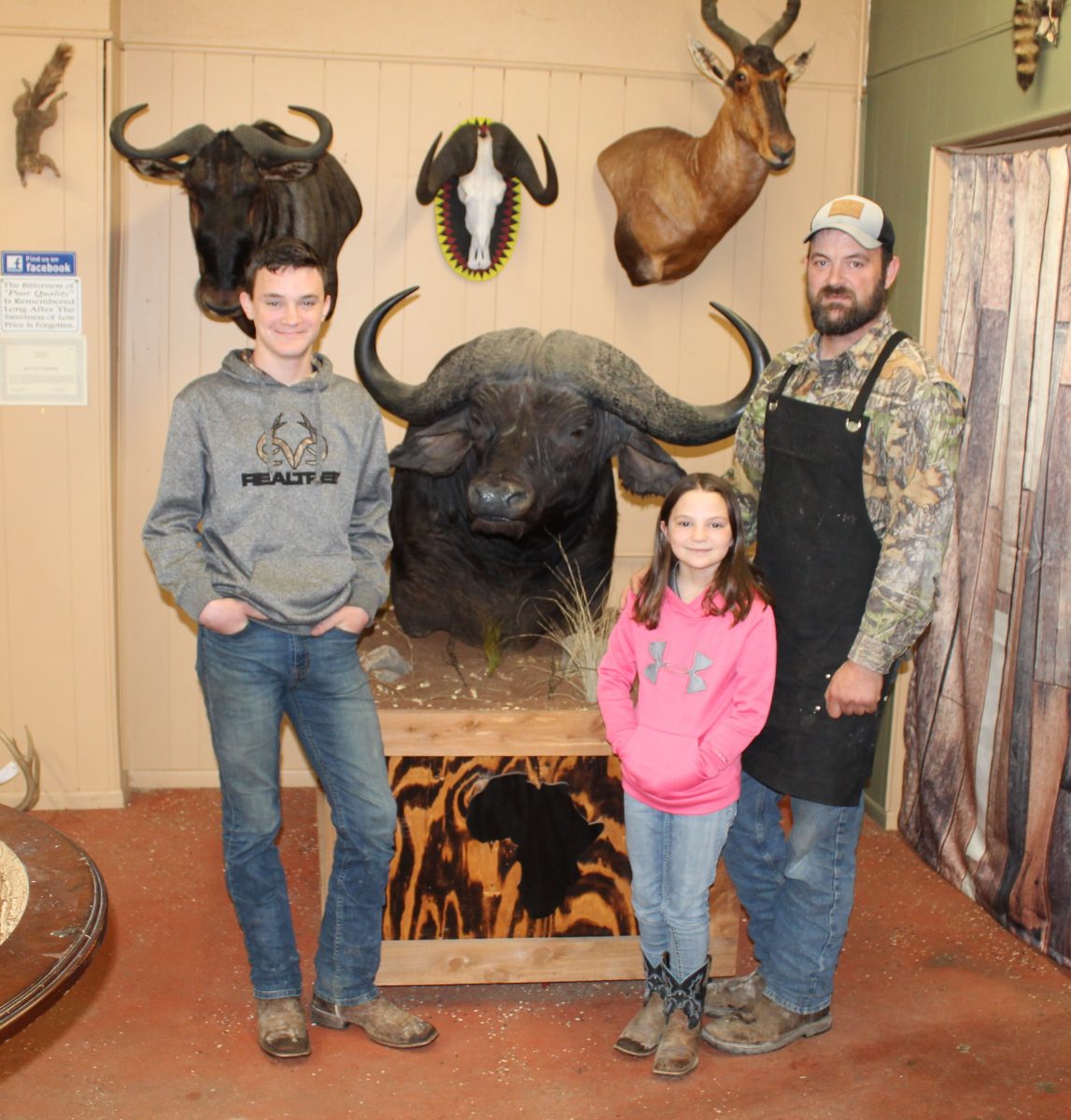 Photo by Shari Harris
From left, Jordan, Paislee and Josh Kinder have several of their African wildlife mounts on display at Big Piney Taxidermy.

Sixteen years ago, Josh Kinder undertook his first taxidermy mount and the squirrel he preserved can still be seen in his shop on South Main Street in Licking. The mounts on display at Big Piney Taxidermy demonstrate a combination of artistry, patience and an understanding of wildlife honed to a high level by owner Josh Kinder.

Josh, wife Trista, son Jordan, 14, and daughter Paislee, 8, combine talents to make Big Piney Taxidermy a success. The business opened in a shop by Josh’s parents’ home on Route BB near Boiling Springs. Two years ago, in need of a larger space to accommodate their growth, the Kinders brought their burgeoning business to 122 South Main Street, next to the library in Licking.

Josh Kinder developed a love for wildlife as a child. He remembers his father, Jeff Kinder, taking him to the woods when he was four or five-years-old. He’s been hooked on the outdoors since then. Kinder used his love and understanding of wildlife, combined with an artistic flair, to develop his skills. With the exception of some online training, Kinder is self-taught in his taxidermy practice. For many years he attended outdoor trade shows and conventions, and built a nationwide network of contacts in the industry. The quality work Big Piney Taxidermy produces has drawn business locally as well as across the country.

When an animal is brought into the shop, careful measurements are taken and a polyurethane foam mannequin is ordered. The animal’s hide must be tanned, and then it is placed over the mannequin to replicate the size and shape of the animal when it was living. Initially, the tanning was done by hand, but as they have become busier, now the Kinders send most of the hides to a tannery. COVID slowed processing times, as tanneries and supply stores closed. Josh Kinder is hopeful that this will continue to improve.

As there are no conventional forms available for most pets, Kinder says he only preserves wildlife. The lack of forms make it difficult to recreate a beloved animal with an appearance similar to when it was living. The finished product is often disappointing to the owner of the pet. But he has produced mounts of many types of wildlife, including from Africa, a Cape buffalo, a blue wildebeest, a black wildebeest and a red hartebeest, all on display in his shop. The most common job he gets is mounting deer.

Big Piney Taxidermy has a goal of completing 10 animal mounts per week. They also donate several mounts each year to fundraisers and memorial events. Facebook contacts account for much of their business. During rifle deer season, the Kinders bring in extra help to assist with the workload. In addition to the mounts that are brought in, remounts of old, deteriorating mounts or improperly done mounts are also considered.

Future plans for their store location include adding JP’s Tackle and Outdoor Supplies LLC. Inventory is coming in now, and the Kinders hope to have it all set up by the end of April. They plan to offer a variety of outdoor fishing, hunting and camping equipment, with the exception of firearms. Live bait including minnows and night crawlers will be available.

Hours in the store currently may vary, but should become more regular when JP’s Tackle and Outdoor Supplies is up and running. Josh Kinder recommends calling ahead, at 417-217-2529, to ensure he isn’t away picking up an animal or getting supplies. Future plans are for 8 a.m. to 5 p.m. hours, Monday through Friday, and weekend hours are by appointment. Their Facebook page is @bptxdrmy – Taxidermist.