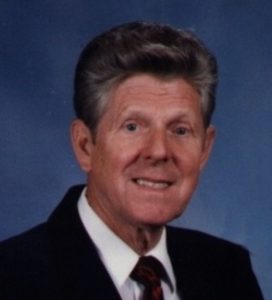 Rev. Thrasher was ordained over 55 years with the Assemblies of God, serving as pastor at Bunker Hill and Villa Hills (Belleville), while in Illinois. He then, from the ages of 65 – 75, became an Evangelist with his wife Elaine, traveling many states winning souls to the Lord, leading churches in Revival. At age 75, Bro. and Sis. Thrasher moved to St. James, Mo., to be by their son, Mick. In Missouri, he served as pastor at Steelville, Davisville, Ellington and Newburg. Just recently he was still talking about desiring to work for the Lord.

His ministry was joyful, anointed and Evangelistic in style. He wrote songs and poems, and after beginning piano lessons in his late 40s, he and Elaine incorporated the God-given music talent of singing and playing the piano into those Revival services. Many souls came to Christ and many received the Baptism with the infilling of the Holy Spirit after powerful preaching.

“Gene” Thrasher was a World War II, Battle of the Bulge veteran, receiving the Bronze star, a recognition of his heroic achievement.

Rev. Thrasher was a very studious minister, and in addition, formal studies in the German language were done at Southern Illinois University. Later, he took a Europe Missions trip with the Full Gospel Business Men. This was just a beginning to many years of further studies at home, not only in the German language, but the Spanish language as well, and all for the purpose of winning souls. He was planning a missions trip to Germany when he had his first heart attack, stopping his plans.

The family tells the big story of Pastor Thrasher’s discipline of prayer, straight living, taking time with his children and grandchildren to give them good, solid Biblical training and “time” for the Holy Spirit to work and mold their lives. He taught to stay full of the Holy Spirit and the importance of praying in tongues daily. The Thrasher family is represented both in Illinois and Southern Missouri Districts of the Assemblies of God.

There are 17 great-grandchildren and one great-great grandchild.

Bro. H. “Gene” Thrasher always gave the Lord all the credit for any ministry accomplishments, and the work of the Holy Spirit working through him to see so many touched through his God-given ministry. He has now completed his last chapter on Earth. Now the first chapter of a life in Heaven begins.