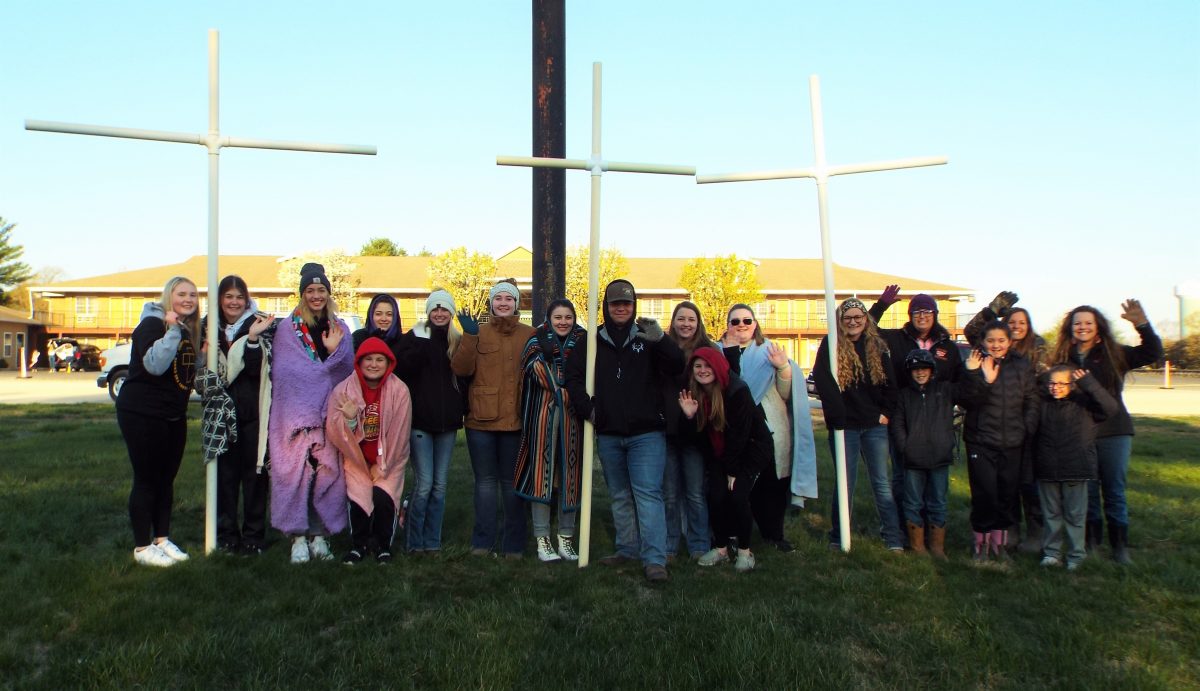 Area churches and individuals participated in the 2021 Carry the Cross, a global movement of believers who are not ashamed of the gospel of Jesus Christ, and who wish to physically and peacefully witness for him. The event took place on Good Friday, April 2, from 7 to 11 a.m. White crosses were displayed roadside throughout Texas County and adjoining counties on U.S. 63 and U.S. 60 highways.

The response from vehicles traveling these thoroughfares was impressive; cars, trucks of all sizes, even emergency responder vehicles sounded horns and waved enthusiastically.

James McConnell with Licking Pentecostal Holiness Church (LPHC) acted as contact person and helped with organization for the Licking area. This encompassed Hwy. BB south of Licking and continued on to the Texas/Phelps County line north on U.S. 63. Churches hosted a Pre-Carry the Cross gathering that included breakfast, event details and prayer.

Wesley and Cathy Wallace from Abounding Hope Church have been participating in Carry the Cross for six years. They shared that through this ministry, two years ago a lady had stopped at Northside Baptist Church in Houston. She thanked everyone for doing the Carry the Cross. She had lost her father recently and was feeling hurt and angry with God. Driving north to south on a lengthy trip, she came into Texas County and started seeing the crosses. She explained that as she drove and saw the crosses, her attitude started changing; this display made a difference in her life!

Among a Licking Assembly of God group gathering of young and old alike, Patsy Grace said, “It is an honor to do this for our Lord and Savior.”

Freewill Baptist Church displayed crosses and greeted passersby on three of the four corners at the junction of U.S. 63 and Hwy. 32.

Christopher and Cha Cha McConnell from Licking Pentecostal Holiness Church enjoyed their interaction with motorists who waved and honked, while displaying the white cross. Cha Cha said she loves the representation for Jesus Christ while Christopher said it’s an opportunity for exposure of the cross to the unsaved.

LPHC participants Robert Lyons and Connie Peterson have been carrying the cross since the inception of Carry the Cross in 2012; standing with them was Mia Cantrell.

Porter Chapel of Competition, Mo., was also represented a short distance from the four-way light in Licking.

Rock Springs Baptist Youth Group member Bethsada Sims responded, “This is the remembrance of Good Friday; Jesus died so that we can live forever without sin,” when asked why she was participating.

Kaida Cook added, “We do this so we can show God’s love through our actions.”

This was the first year for Kandace Liveoak and Davon Cremer from TLC Worship Center to Carry the Cross “for Jesus.” Cremer said she participated, “In remembrance of Christ’s death and in memory of a friend, Janice.” Fellow member Jessica Sonsoucie has been participating for the past two to three years.

Individuals also contributed to the movement; among them were Bob and LeAnn Green, Sam and Taylor Farrow with friends Jayden and Deegan, and Randy and Mieke Ingram.