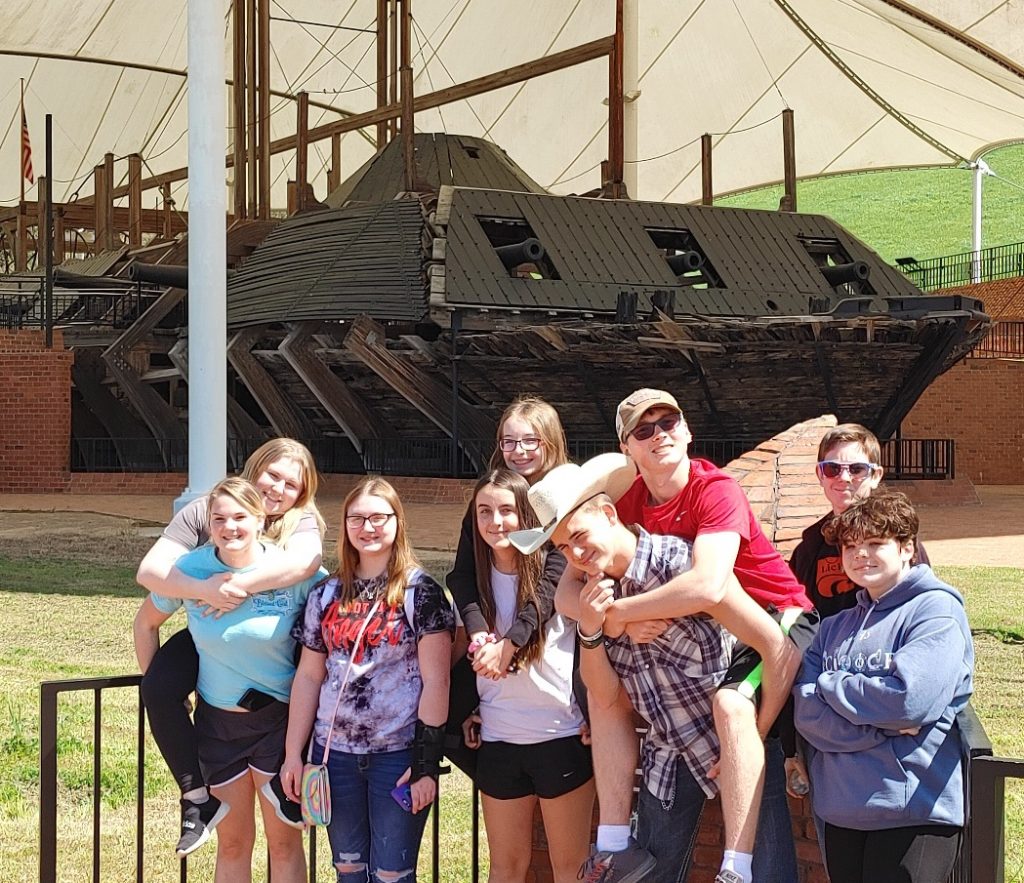 The battle of Vicksburg occupies about as much room in the history books as Gettysburg, and for good reason. Dubbed by Jefferson Davis as “the nailhead that holds the South’s two halves together,” Vicksburg, Miss., was crucial to the war effort of the South. So much so that the Confederates fortified the town, with riverfront batteries and forts surrounding the town with a total of 172 cannon, guarding all land approaches. As important as it was to the Confederates, it was just as important to the Union, allowing them to cut the Confederacy in half and isolating and cutting supplies to the rest of the South. It was the significance of this battle that students all over the country read or hear about in school, and Licking History Club members decided that they wanted to see it first-hand.

The trip was budgeted for two days, and we still did not get to see all that there was. Scheduled stops included the Vicksburg National Military Park, Grant’s Canal, the Jesse Brent Lower Mississippi River Museum and the Historic Vicksburg Courthouse. First stop was the battlefield itself. As students toured the battlefield, they began to get a sense that not only was the battlefield vast, but the sheer numbers of troops involved for both sides was enormous. Many students commented on seeing a large number of Missouri plaques, indicating the location specific units all around the battlefield. They also remarked how there were Missouri markers for both the Union and Confederate sides, and at a few spots they were right across from each other, indicating they were firing at each other during the battle. We witnessed many of the earth-works that were constructed on both sides and, even more impressive, that they were still standing. It was pointed out to the students that many of the trenches dug during the battle were still there, albeit washed in over the many years since the siege. One of the crown jewels of the park was the U.S.S. Cairo. One of the first Ironclad gunboats, she sunk after being hit by a mine in the Yazoo River just north of Vicksburg and was raised from the river in 1964. We toured the battlefield between four to five hours and still didn’t make it to the southern half, which was planned for the next day. Instead, we used the remaining daylight to see what was left of Grant’s Canal, just across the Mississippi in what is now the town of Delta, La.

Grant’s Canal was an effort by Ulysses S. Grant to bypass Vicksburg after several failed attempts to take the town and get the Navy past the guns mounted in the town. He attempted to have his men dig a canal that would come out just south of the town. Unfortunately, disease wiped out a lot of the Connecticut soldiers tasked with digging the canal and subsequent floods, along with the Mississippi River changing course, have left little of the canal visible.

The Old Court House Museum in downtown Vicksburg turned out to be a treasure trove of artifacts from the Civil War and the period of westward expansion. Everything from the chair Grant sat in at his headquarters to Jefferson Davis’ tie he wore for inauguration as President of the Confederacy is located there. In the upstairs portion is an intact courtroom, as it was in the 1800s, along with several rooms dedicated to what daily life was like back in Vicksburg’s early years. The Jesse Brent Museum was dedicated to those that work and live on the river, either on the barges delivering goods or the engineers that try to make the river better and safer to travel. With an actual riverboat that operated until its decommissioning in 1993, students got to see what living conditions were like on these tugs that push barges up and down the many rivers in the U.S.

In all, students had a chance to see with their own eyes how this battle they read about in their history class unfolded, the soldiers involved, the effort both sides put into saving and preserving what they thought was right. However, the most discussed take away for those that went on the trip was how the state of Missouri split, not just geographically between north and south, but ideologically as well, and faced itself at many points along the battlefield.