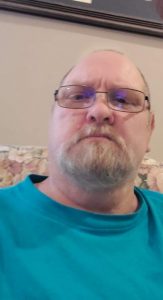 Ron attended Licking High School where he was an active member of FFA and graduated with the Class of 1978. After school, one of his careers he absolutely loved was becoming a police officer in Licking. Later, he worked at the Walmart Distribution Center in St. James until his health declined.

In Ron’s younger years, he was baptized at Boone Creek Church in Licking. When he moved to Salem, he placed his membership at Mount Herman Church.

Ron enjoyed the outdoors, especially hunting and fishing. He was still a kid at heart, collecting hot wheels and die cast cars, drag racing, watching St. Louis Cardinals games and wrestling, being a jokester and just sitting down to shoot the breeze with his friends. But his pride and joy were his daughter, Laken, and his wife, Josey.

Ron is survived by his wife, Josey, of Salem; his daughter and son-in-law, Laken and Randy Stites, of Branson; stepson, of the home, Michael Varnum; his mother, Maxine Ramsey-Hall of Rolla; his father, Dale Ramsey, of St. James; his four siblings and their spouses, Cheryl (Lynn) Steele, of Middletown, Mo., Lesa Ramsey of Rolla, Rodney (Tammy) Ramsey of Licking, and Melissa (David) Elliott of St. James. Ron is also survived by seven grandchildren, five great-grandchildren, and numerous nieces and nephews. He will be greatly missed by the ones who knew and loved him.

He was preceded in death by his stepfather, Merle Hall; his grandparents, Vernon and Elizabeth Ramsey and Virgil and Juanita Gish; as well as one great-grandchild.

Visitation for Ron Ramsey will be April 17, 2021, 11:00 a.m. until the Memorial Service at 12:00 p.m. at Mount Herman Church in Salem, with Gaye Lynn Blankenship officiant. Burial to follow at Boone Creek Cemetery in Licking.