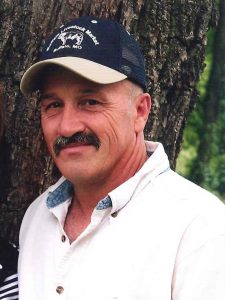 Larry was preceded in death by his parents; son Jerrid Ross Hill; grandparents; and many aunts, uncles and cousins.

Larry joined the Air Force straight out of High School and served as an Air Patrol while in service. He spent a great deal of his life hanging drywall in various cities. He later went to work for Missouri S&T in Construction and Maintenance until he retired in August 2017 at the age of 62.

Larry loved his wife Diana and didn’t really want her out of his sight. When she would go on visits, trips or shopping he would always give her a call to see when she would be coming home. Family and friends were important to Larry also. He was the happiest when he and Diana could go riding horses. Horses were a passion of Larry’s from a very young age. At a younger age, there wasn’t a horse around he couldn’t or wouldn’t ride, but he did get wiser as he got older. He loved racing his Fire Ball when the tracks at Raymondville were open and was never defeated. Fire Ball’s reward was a cheeseburger after each race. He loved his guns, coon hunting dogs, fishing, deer and turkey hunting and anything to do with the outdoors. He enjoyed raising cattle as long as his health allowed.

Larry and Diana’s last once in a lifetime trip was riding horses in Wyoming and South Dakota seeing all of the landscape and beauty of the Big Horn Mountains in 2020.

As Larry would quote, Life is Good! He always had an ornery streak, a side grin whenever he was up to something.

He will be greatly missed by all those that knew and loved him.

Online condolences may be made at www.evansfh.com. Memorials, in memory of Larry are suggested to Boone Creek Cemetery, Oak Dale Cemetery or Back Country Horsemen of Missouri, donations may be left at Evans Funeral Home.