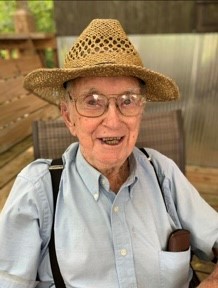 Isaac “Ike” Leon Ashby, age 91, was born March 12, 1930, to Isaac Franklin and Julia Mae Overton Stewart Ashby. Ike was born in the Promise Land community of Blytheville Ark., at the family home. His mother often said Leon was born over in that corner there, while pointing to a corner in the house. Leon passed away April 10, 2021, at his home, surrounded by family.

Ike was preceded in death by his parents; brothers Charles “Jack” Stewart and Walter Franklin. Also preceding Ike in death was his wife, Mary Frances Lester.

On June 21, 1954, Ike married the love of his life Frances, and to this union four children were born.

Ike is survived by his four children, Douglas Allen and wife Debra of Licking, David Leon of Lampe, Lisa Jane Pursifull and husband Jerold, and Malinda Kay Davidson and husband Tod, both of Houston; and two sisters, Nelly Don Beard and Paula Jean Danner, both of Blytheville, Ark. Ike is also survived by 12 grandchildren and 22 great-grandchildren, one great-grandchild on the way, along with a host of nieces, nephews and friends.

Growing up in the Promise Land Community, only two miles from the Mississippi River, Ike found his love for the outdoors. Surrounded by miles of cotton fields, areas of beautiful virgin timber and even swamplands, Ike and his brothers could often be found fishing or hunting when they had a break from picking cotton. Cotton picking was serious business, and Ike bragged that he won a Cotton-Picking Championship by picking 400-lbs of cotton in one day.

Attending school in Blytheville, Ike fell in love with baseball. He became an avid first baseman and a great ball player. Prior to graduating in 1948, Ike received a full ride baseball scholarship to the University of Alabama. Ike declined the scholarship and went on to play baseball in the minor leagues, eventually attending spring training for the Pittsburgh Pirates where he received a contract to play in their farm system. One of his great achievements was hitting a double off of Hall of Fame Pitcher Robin Roberts.

While still playing baseball, the Korean War was gearing up, and Ike answered the call for service. He enlisted in the United States Navy on July 13, 1951. After a bout with serious heart issues, Ike was honorably discharged on November 24, 1952.

After returning from the service, Ike moved to St. Louis, Mo., where he worked at McDonnell Douglas. Ike became a journeyman machinist and even worked on the Mercury Space Craft.

The “Call of the Wild” never quite left Ike’s heart, and in July of ‘63, Ike enrolled in the Missouri Department of Conservations Academy, graduating in October of that year. After receiving his commission, Ike moved his family to Vienna, Mo., in Maries County, where Ike served with the commission for several years. He retired as a Game Warden after 25 years, in Texas County.

While being deeply involved in the outdoors, Ike found his “Claim to Fame” and started making turkey calls in the basement of his Vienna home. Forming the company Ashby Turkey Calls, Ike traveled all over the country, giving demonstrations and attending shot-shows. Ike’s calls were instantly popular and now are considered amongst the elite of collector calls in the world. In the early ‘80s when Ike transferred to Texas County, he commercialized the business, and with family by his side, started mass-producing these calls. The old slogan was, “Let Ashby Turkey Calls put a load on your shoulder,” and for many hunters nationwide, they did exactly that.

As proud as he was of his many accomplishments, the one most important was his salvation. Ike was baptized in February 1966, by Bro. Floyd Kobb at the First Baptist Church in Vienna. He continued his walk and became a member of the churches in the communities where he lived, joining the First Christian Church in Houston and the General Baptist Church in Ava. In May of 2000, Ike rededicated his life and was baptized in the same waters where his savior was baptized, in the Jordan River. He always liked to talk about the large group of women that were singing “Let’s go Down to the River to Pray,” while he was baptized. In 2014, after 50 years, Ike, who had been a member of the Masonic Lodges in Vienna, Houston and Ava, became a Master Mason.

Dad, Ike, Leon, Uncle Leon, brother, and PaPow, will be forever remembered and deeply missed. However, we are fortunate that goodbye is not forever but just for a time; because of his love and acceptance of Jesus, we can all be reunited again.

In lieu of flowers, Memorials are suggested to Gideons International. Online condolences may be sent to www.evansfh.com