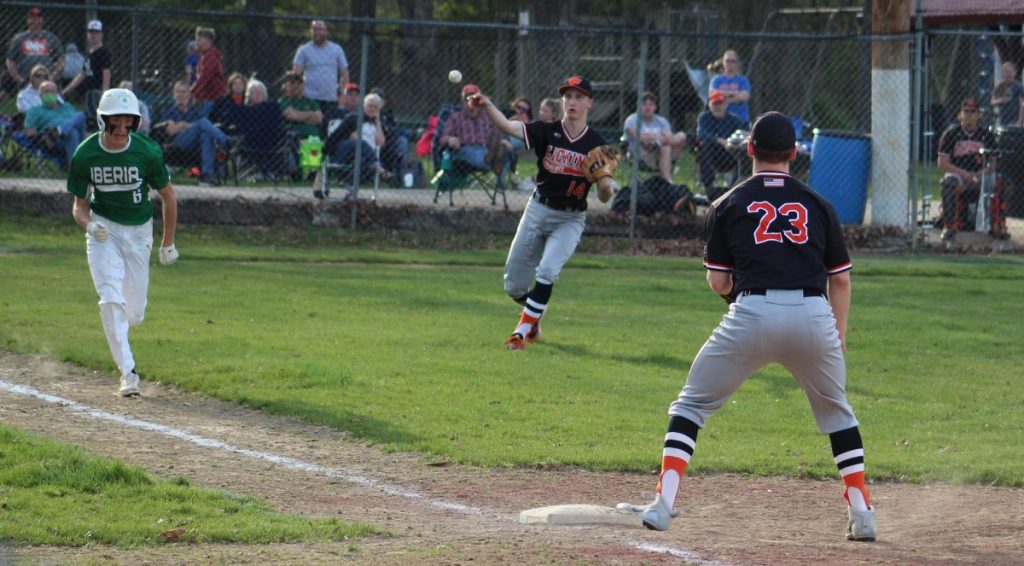 Photo by Shari Harris
Pitcher Keyton Cook’s throw beats the runner to first in the Iberia game. Silas Antle is covering first base.

The Licking Wildcats shut out the Newburg Wolves 16-0 on Monday, March 29. The win raised Licking’s record to 3-1 on the spring.

Licking scored eight runs in the first inning and ended the game on the run rule in the fourth. Austin Stephens was the winning pitcher with four scoreless innings in which he allowed two hits and struck out seven.

Keyton Cook doubled, scored three times and drove in three runs as the Wildcats’ leadoff man. Malachi Antle went 3-for-4 with a double, a triple and four RBIs.

The Wildcats also received a two-hit night from Spencer Rogers. Cole Wallace had a big night with a double, triple, and three runs-batted-in.

In the JV game, Licking prevailed 21-3. Alex Buckner got the win on the mound as he gave three runs on two hits and fanned four.

Kaiden Wantland was the catalyst for the JV Cats’ offense. He doubled and singled while scoring four runs. Logan Gorman banged out a pair of hits and drove in five runs, and Silas Antle homered and doubled.

It took eight innings, but the Licking Wildcats slipped past the Salem Tigers 2-1 on Tuesday, March 30, in Salem.

A pair of bases-loaded walks in the top of the eighth inning put Licking in front after neither team managed to dent the plate in the first seven innings. Cole Wallace pitched around a pair of two out singles and an error in the bottom of the inning to secure the win.

Silas Antle started and worked the first four innings for the Wildcats. He kept Salem scoreless on two hits and fanned three.

Wallace allowed just the one unearned run on three hits. He struck out three and did not walk a batter to pick up the win.

Runs were hard to come by and so were hits. For Licking, Easton Ice was 2-for-4 with a double and a run scored. Rusty Buckner and Malachi Antle singled while Keyton Rinne picked up an RBI.

Licking trailed 5-0 after three before rallying for four runs in the top of the fourth. Salem answered with a run in the bottom of the inning, and Licking struck once in the fifth but it was not enough as the JV Cats fell to 1-1 with the loss.

Garrett Gorman had an RBI single and run scored for Licking. Logan Gorman doubled and scored twice, Rusty Buckner doubled in the game, as did Elijah Ullom.

The Licking Wildcats returned home after nearly two weeks on the road and shutout the Crocker Lions 13-0 in five innings on Thursday, April 1.

Keyton Cook started and picked up the win, working the first three innings. He fanned six and didn’t allow a hit.

Landon Medlock finished up for Licking with two scoreless frames. He gave one hit and struck out four.

Rusty Buckner paced the Wildcat offense with a 3-for-3 day that included a double and five RBIs. Easton Ice banged out three hits and drove in three runs, and Cole Wallace had a pair of RBIs and two runs scored.

Licking improved to 5-1 on the season. The win was the fifth consecutive victory for the Wildcats. Crocker did not field a JV team.

The Licking Wildcats made quick work of the Richland Bears on Monday night, April 5, in Licking with a 15-0 victory.

Licking received a strong start on the mound from Landon Medlock. The righty threw a no hitter, struck out five and walked one over three innings as the contest ended early on the run rule.

Licking moved to 6-1 on the spring with the victory, which was its sixth in a row. No JV game was played.

The Iberia Rangers defeated the Licking Wildcats 9-2 on Tuesday night, April 6, at Deer Lick Park and ended the Wildcats’ winning streak at six.

Iberia’s attack was consistent throughout the night, scoring runs in five of seven innings on 15 hits. Meanwhile, the Wildcats never got their offense going, scoring two runs on just three hits and striking out 13 times.

Cole Wallace led the limited offensive attack for Licking as he went 2-for-3 with a double, triple, and two runs scored. Malachi Antle drove in both Wildcat runs and Rusty Buckner had Licking’s other hit.

Keyton Cook was Licking’s starter and took the loss. He went the first four innings and was charged with five runs, three earned, on nine hits.

Wallace followed Cook to the mound and worked an inning and two-thirds. He allowed four runs on six hits, and Elijah Ullom finished up with an inning and one-third of scoreless relief in which he did not surrender a hit.

In the JV game, Licking emerged with a 16-6 victory. Alex Buckner got the win on the mound and struck out three over three innings.

Licking’s Silas Antle powered the offense with a 3-for-3 night that included a home run and four RBIs. Elijah Ullom doubled twice and drove in two runs, Austin Stephens and Logan Gorman scored three runs, and Nathan Burton doubled as part of a 12-hit Wildcat attack.

The JV Cats raised their record to 2-1 with the win.