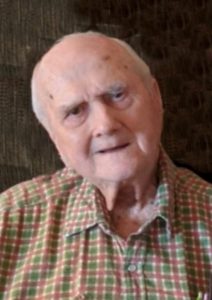 John was raised on the family farm with four brothers and five sisters. He attended a small country school and later graduated from Mountain Grove High School.

After graduation, John moved to central Iowa to work as a farmhand until he was drafted into the Army in 1951. John was part of Company B that was sent to Germany during the Korean War, and he remained in close contact with the men of his company for his entire life, attending and holding Army reunions for 60 years. His service in the Army and to his country remained a constant source of pride for John.

While in Iowa, John met and fell in love with Barbara Kubik, and they were married on August 30, 1955. In 1961, John and Barbara moved to Missouri where they farmed and raised beef cattle. Later, John also served on the Board of Directors for Intercounty Electric Cooperative for over twenty years. While on the farm, John and Barbara raised four children, Jenni, Julie, Jeff and Jeretta. John also enjoyed hunting, fishing, and mornings at the local coffee shop with his many friends. After John suffered a stroke in 1997, he and Barbara moved to Springfield to be closer to their children.

The most important part of John’s life was his large and extended family, and he looked forward to each and every visit or phone call from all of them and his many friends. He will always be remembered by his grand, great grand and many other children that loved him and called him Papa or Uncle John…for giving them Tootsie Rolls whenever he saw them. His immense delight in the many hugs and kisses he received from them was immeasurable.

Graveside services will be held at 2 p.m. on Thursday, April 15, 2021, at Stubbs Cemetery in Mountain Grove under the direction of Evans Funeral Home of Houston. In lieu of flowers, donations can be made to Stubbs Cemetery or St. Jude’s Children’s’ Hospital.