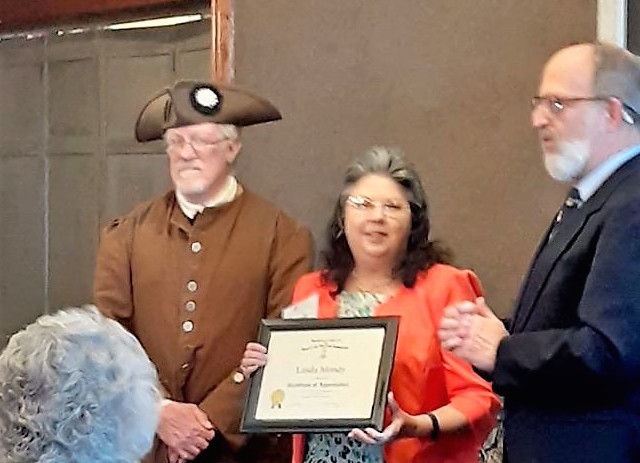 Photo submitted
Sons of the American Revolution members presented Linda Mondy, of Licking, a Certificate of Appreciation for lineage research. Pictured from left: Don Turner, Secretary of Ozark Patriots who was in period dress, Mondy, and Kelvin Erickson, President.

Linda Mondy, of Licking, was presented with a Certificate of Appreciation by the Ozark Patriots Chapter of The Sons of the American Revolution (SAR) at a recent Daughters of the American Revolution (DAR) meeting. SAR members Don Turner, Secretary of Ozark Patriots; Kelvin Erickson, President; Danny Creason, Genealogist; and Herb Turner, Vice President were in attendance for the presentation.

The SAR chapter contacted Mondy when no direct evidence could be found to support an individual’s application for membership. In order to join SAR or DAR, you must be able to provide documentation to prove the birth, marriage, death and relationship to parents for each person in each generation of your lineage back to the patriot of the Revolutionary War. SAR and DAR do not accept family histories or county histories as proof of lineage. Primary documents must be provided that were issued at the time of the event. Back to 1910, birth, death, and marriage records are the most reliable sources. Before 1910, census records, cemetery records, wills, probate records, land records, military records, Bible records, etc. are often used.

Mondy has been the registrar for the Noah Coleman Chapter NSDAR since 2004. The Daughters of the American Revolution is an organization with a deeply rich history while also being truly relevant in today’s world. More than 1,000,000 women have joined the organization since it was founded over 125 years ago. They became members to honor their heritage as well as make a difference in their communities across the country and the world. Learn more about the amazing history of the DAR and what members are doing today to continue that legacy at www.dar.org.