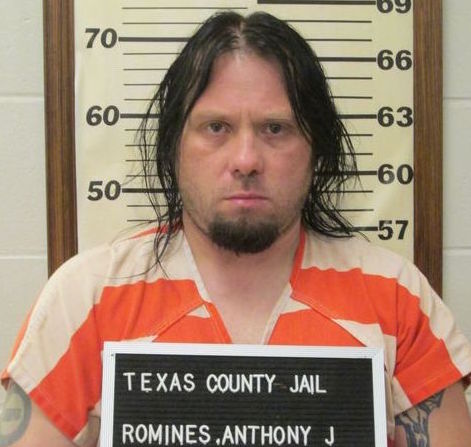 On Thursday, May 6, 2021, Anthony Joe Romines, age 41, of Bucyrus, was arrested in the 11000 Block of Rocky Ridge Road in rural Texas County, Mo., for Possession of Child Pornography. Romines was incarcerated in the Texas County Jail pending warrants.

The investigation of Anthony Romines was initiated as a result of a Cyber Tipline Report by internet service providers, whereas suspected child pornography was uploaded and distributed to other private users of the services. During the investigation and through legal process, Romines was identified as the suspect.

During the evening of May 6, 2021, Romines was interviewed in the 1000 Block of Opportunity Circle in Houston. During the interview, Romines admitted to knowledge, control and ownership of the account(s) from the Cyber Tipline Reports. Romines acknowledged he had transmitted child pornography via the internet service providers. In addition, Romines was in possession of child pornography on his cellular device, which the detective observed. Romines reported he recklessly possessed the child pornography and stated it was from previous behavior, however the timestamp was May 6, 2021, during a morning hour.

The charges for which Romines have been arrested are merely accusations and are not evidence of guilt. Evidence in support of the charges must be presented before the court of competent jurisdiction whose duty is to determine guilt or innocence.