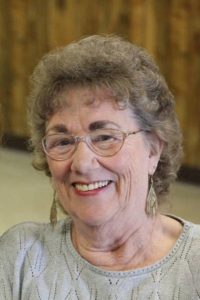 Glenda O’Neil was a loving mother, grandmother and sister. Glenda was born May 23, 1937, in Beatrice, Neb. On November 18, 1953, she was united in marriage to Warren G. Burke who served in the military and gave his life for his country. On June 12, 1955, she was united in marriage to Billy Dale O’Neil. This began Glenda’s traveling adventures with her family as they served our country through military service. Glenda cheerfully supported her husband and the Army as she packed and moved every year or two with five children as the Army would restate them. While stationed in Barstow, Calif., she helped plant a new church and volunteered as the piano player. Glenda was a homemaker when her children were small and the absolute best cook. Throughout the years she was employed or volunteered in a variety of endeavors; including leading the Brownie and Girl Scouts for many years. When she and Bill retired in Houston, Mo., in 1973, she was employed at the Lazy L café, Lee Factory, Brown Shoe Factory, Walmart and they had their own business, O’Neil’s Painting Service. Glenda was always athletic, playing sports all of her life until she traded her sports to watch her children and grandchildren play. Some of her favorite hobbies included gardening, sewing, reading, cooking (best spaghetti ever), quilting, playing the piano, dancing, singing and most of all she enjoyed her family. As a teenager she gave her life to the Lord Jesus Christ. Two of the greatest gifts Glenda gave her children were introducing the Lord to each of them and unconditionally loving each one.

Glenda was preceded in death by her parents, Vera Arlene and Glenn Winslow; her daughter, Terry Phillips; and her great-grandson, Axl Romine.