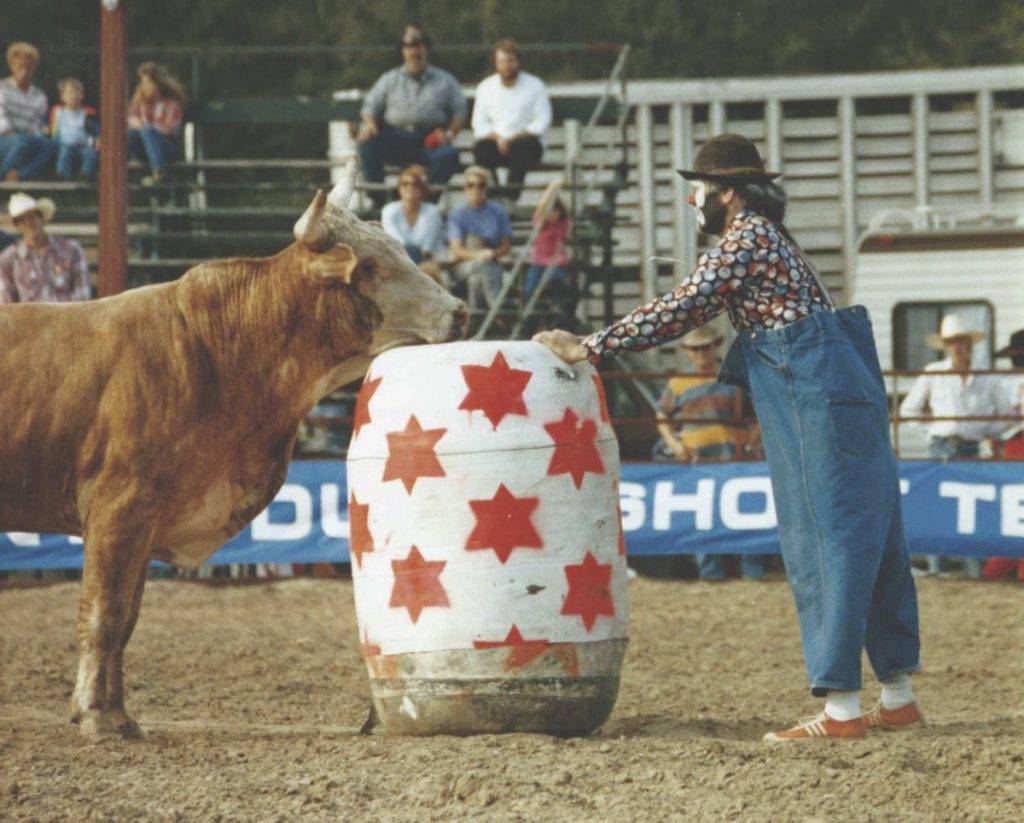 Rodeo Clown Hollywood Harris will be entertaining the crowd and protecting the cowboys at the 36th Annual Licking Chamber of Commerce Rodeo on June 4 and 5.

Behind the painted face and rag tag clothes of Rodeo Clown Hollywood lies a Texas native, Clifton Harris. Harris always dreamed of being a rodeo clown.

“I was born into the livestock business and grew up around rodeo,” says Harris. He competed for a while, but he was more suited for comedy, and clowning was a natural progression.

As a child, Harris was fascinated by two Texas clowns, Dan and Billy Willis. He spent months studying the work of master rodeo clowns, including veterans Quail Dobbs, Lecile Harris (no kin) and John Gilstrap. Harris became hooked on the comedic skills of Don Knotts (Barney Fife on the Andy Griffith Show), Red Skelton and the Three Stooges. Physical comedy was always a personal favorite and performers like Steve Martin, Tim Conway and Jim Carrey have been role models.

Harris is regarded as one of the most innovative clowns in rodeo since his start in 1984. He has been chosen to perform at International Finals Rodeos, both as Comedy Act and Barrel Clown. Harris won a record six events at the IFR Contract Act Show in Oklahoma City including Comedy Act, Dress Act and the Barrel Man Competition!

After his move to the Professional Rodeo Cowboys Association, the Professional Bull Riders Inc. (PBR) embraced Harris’s brand of comedy and more importantly, his ability to protect the riders. The Tuff Hedeman Bull Riding Challenge in Fort Worth was his first Bud Light Cup Event, followed by the PBR Finals in Las Vegas, The Laughlin Series Finals and many Bud Light Cup Invitationals.

Harris prides himself on keeping his act fresh and original. His popular cast of characters includes: Quick Draw McGraw, (a mechanical outlaw that matches wits with Hollywood) and Dino the Rope-a-Saurus, which features him astride a 6-foot tall inflatable dinosaur that is as difficult to get into the roping box as many of the high-strung horses of the calf ropers.

Harris loves magic and is an accomplished illusionist and sleight-of-hand artist. One of his most acclaimed acts is an illusion called “Hollywood Houdini” (The Metamorphosis)… Hollywood magically changes places with an assistant who is locked in a box.

Harris knows that what keeps him in tune with the younger crowd is that he is still a kid himself. Rodeo is the reason the kids come… but without Hollywood, the experience wouldn’t be the same.