Fishermen have been traveling to Texas County for about a century to take guided floats with the Wades on the Big Piney River. What started with William Wade in the early 1900s has continued through five generations, and Art Wade & Sons Guide Service now offers over 100 years of combined experience guiding in the area.

Art Wade recalls his family lived in Bloodland, where Fort Leonard Wood is now located. His father, Charles R. Wade, began guiding there in 1928. At that time, trips were taken in a wooden paddle jon, and wagons and teams were used to take fishermen and boats to and from put-in and take-out spots on the river. But he wasn’t the first Wade to guide. He learned from his father, William Wade.

In 1940, the government finished buying out the landowners in the area of Fort Leonard Wood, and Charles and his father moved to Cedar Ridge, above Slabtown. They built two houses there, where William lived until his death in 1944. Charlie and his second wife, Cora (Firestine) Wade, lived there and raised their family until the late ‘50s, when they moved to Slabtown.

Charlie made his own boats, 16 foot wooden paddle jons, and guided fishermen on the river all his life. Charlie’s wife, Cora, cooked breakfast for fishermen and cleaned the little white house where their customers stayed, beside their home in Slabtown. Just as his father taught him, Charlie passed the trade down to his sons. Art began guiding in 1949, at the age of 9, and his brothers Rich, Paul and Dean guided as well. 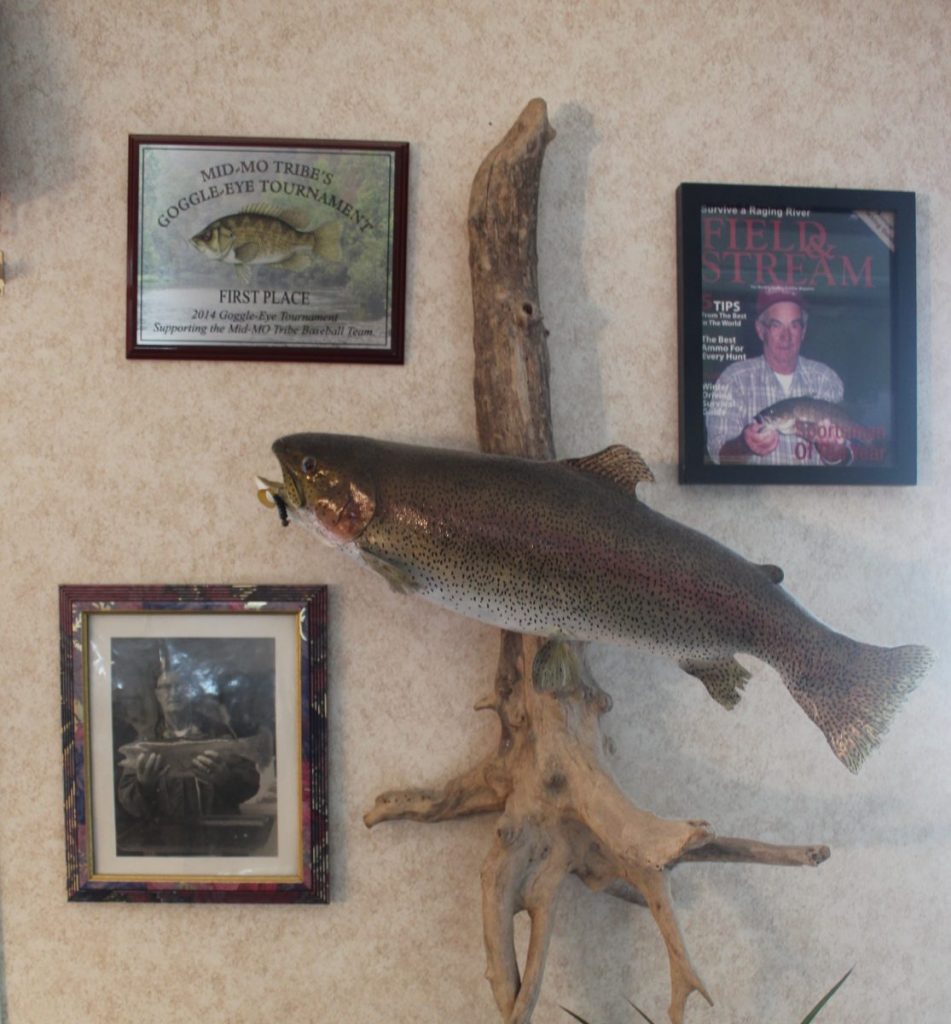 Photo by Shari Harris
The Field & Stream cover, Art Wades lunker trout, a plaque from his first place win of the 2014 Mid-Mo Tribe Goggle-eye Tournament, and a picture of Charlie Wade with his lunker are proudly displayed on Art’s trophy wall.

Art guided on the Big Piney, the Gasconade, the Osage and even the Roubidoux. During his years of fishing, he made the cover of Field & Stream magazine and landed a lunker trout on Opening Day at Montauk, nearly identical to one his father caught decades earlier. He paddled fishermen up and down the rivers for more than 65 years.

Many changes took place over those years. In 1972, Art transitioned from the wooden paddle jon, which had to be stored in a pond to keep the wood swelled and water tight, to a 17 foot aluminum paddle jon, which required no special storage and was lighter to transport. The horse and wagon used by William and Charlie for transport were replaced with a car and trailer, then with trucks and trailers.

But many things have remained the same. Like Cora before her, Art’s wife, Fay, helped take care of the customers, cooking and cleaning and helping get boats and customers to and from the river. The Wade family continues to work together to make a float trip a memorable experience. Today, the two youngest generations of Wades chip in to guide groups on the river, fishing for smallmouth bass and goggle-eye. Some of the fishermen who use their guide service began fishing with Charlie, then fished with Art for decades, and now are returning to fish with Art’s sons and grandsons. 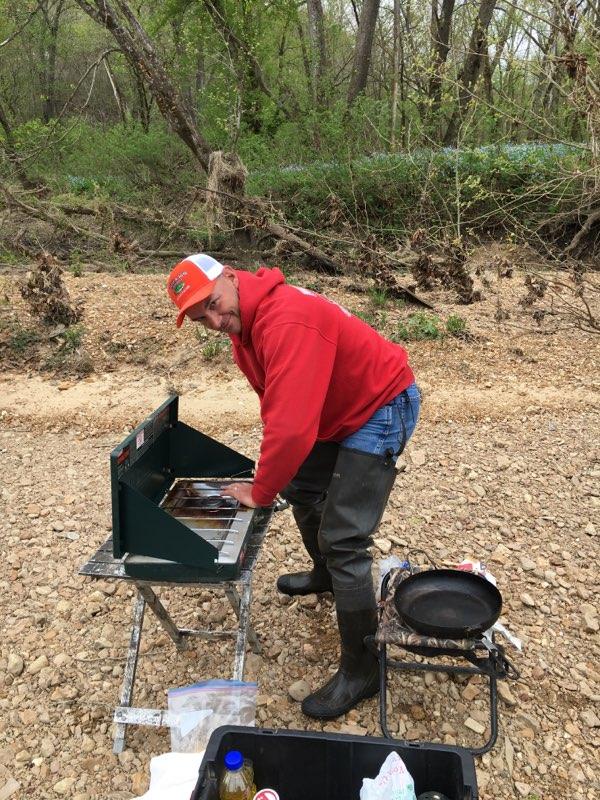 Photo submitted
Fishermen and guides love the shore lunches that Jeff Wade and his family provide on their floats.

A favorite tradition during the floats is the shore lunch, when they build a fire and enjoy frying their catch, along with potatoes and onions. When asked if there was ever a time when they didn’t catch enough for their lunch, Art’s son Jeff said they’ve always had enough.

But possibly the most important tradition that continues is passing on the heritage of guiding to the next generation. Jeff recalls learning from his father and his uncles and appreciates all they did to teach him.

“I don’t take it for granted,” says Jeff. “I want to make sure someone else carries it on. I’m doing my best to train the next generation.” 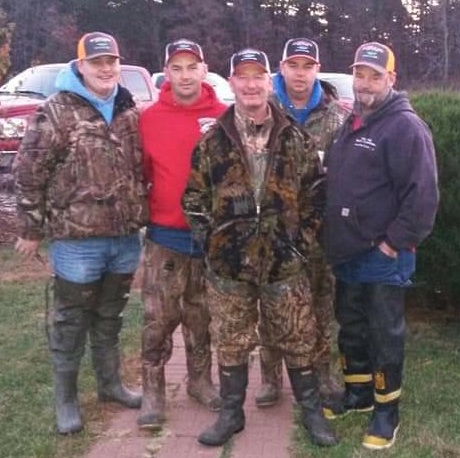 Jeff took over management of his father’s guide service about five years ago when a sawmill accident forced Art to retire from guiding. Jeff and his brothers, Frank, Terry and Luke, all began guiding between the ages of 9 and 13, and are passing their knowledge down to Luke’s son Lane, who also guides, Frank’s son Tyler, who has guided, Terry’s son Austin, who plans to be involved in the future, and Luke’s son Lake, who plans to be a guide. They work together to keep Art Wade & Sons Guide Service going.

The business is Jeff’s priority; he is working to develop it into a full-time job. With the help of his brothers and nephews, Jeff Wade offers guided floats on the Big Piney and Gasconade Rivers, and can take individuals up to large groups.

One family has made Art Wade & Sons Guide Service part of their holiday tradition. They meet in Licking early in the week of Thanksgiving, and the Wades take seven boats of them fishing. A couple of Russian fishermen have returned two consecutive years to enjoy the fishing, as well. Becoming a part of others’ traditions and sharing his culture with other cultures just add to the enjoyment for Jeff Wade.

“I want to give full respect,” says Jeff. “It’s been a blessing to all of us to have Dad pass it down to us. It’s a tradition; it’s more than a business. It’s pretty awesome to get to make a living doing something you love.” 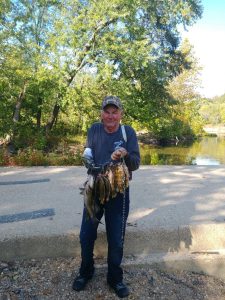 Photo submitted
Art Wade still fishes with his family and shares his years of experience.

Art is glad Jeff decided to keep the business alive. “I just love it,” Art says. “I’m so glad he took it over.” And Art reports that though he doesn’t guide anymore, his sons and grandsons continue to take him fishing. With his lifetime of knowledge of the river and fishing, while he’s enjoying fishing, the younger generations continue to learn from their mentor.