Photo by Shari Harris
Jim, Josh and Shelby Hood talk to visitors at the cemetery on a blustery morning Saturday while they were collecting donations. Beautifully decorated memorial stones can be seen across the newer portions of the cemetery.

A 3-on-3 Basketball Tournament will be hosted by the Board of the Licking Cemetery Association, Saturday, June 26. The Licking Christian Church gymnasium at 318 N. Main Street, next door to the cemetery will be the site of the event. Registration will be from 8 – 9 a.m. A 3-point contest begins at 9, with a $20 entry fee and a cash prize for the winner. Tournament play with men’s and women’s divisions starts at 9:30 a.m. The entry fee for teams is $100 before June 19, and $125 after June 19. Teams may have up to five players and can register with Kassi Ramsey at Right Away Rent to Own or call 417-818-2488. The purpose of the tournament is to raise funds to benefit the upkeep of the cemetery.

Licking Cemetery is one of the first things people see when they enter the city from the north side on Highway 63. Its appearance, justly or not, reflects upon the community as a whole. It has been many years since the annual interest and donations made to the Licking Cemetery have equaled the costs of maintenance. Though it is the only cemetery within the city limits, the Licking Cemetery is not operated or funded by the city, nor is it affiliated with the Christian Church, located next door to the cemetery.

Prior to 1971, the cemetery was operated by trustees. In 1971, the Licking Cemetery incorporated, and the trustees became a board, which is responsible for managing funds and care of the cemetery. Currently, Rick Mosher, Jim Hood, Jim Stephens, Kassi Ramsey and Josh Hood are on the board. They worked together throughout Memorial Day weekend to collect donations at the entrance to the cemetery.

Many factors contribute to the imbalance between maintenance costs and donations. Income from the sale of plots has decreased. Plots used for many burials were purchased years ago, and cremations are on the rise.

Donations drop off over the years. Though there are exceptions, two generations is typical for families to donate to cemeteries for maintenance of their loved ones’ graves; some of the graves in the Licking Cemetery go back five or six generations. Descendants may not remain in the area. As our country becomes more mobile, roots frequently run less deep.

At the same time, maintenance costs continue to rise. The number of memorial stones to be trimmed around increases with each burial. As more land has been put into use by the cemetery, mowing has become extensive. Old stones fall into greater disrepair as weather takes its toll.

Photo by Shari Harris
The west central part of the Licking Cemetery is the oldest. These graves are mostly 150-200 years old. The stones are usually not decorated; the effects of weather leave them crumbling and at times broken and lying on the ground.

According to Goodspeed’s History of Texas County, the first burial in what is now the Licking Cemetery was in 1837, when Stashe Ann Mitchell, at less than a year of age (April 18, 1936 through January 21, 1837) was interred. Find a Grave indicates Benjamin Russell Wright and Mahala Wright preceded her, having died, respectively, on Oct. 12 and Oct. 13, 1821. Regardless, of its origins, by the end of the 1850s, possibly ten had found their final resting place on the grounds. This number nearly doubled over the following decade, and as settlers moved to the area, burials in the cemetery continued to increase. 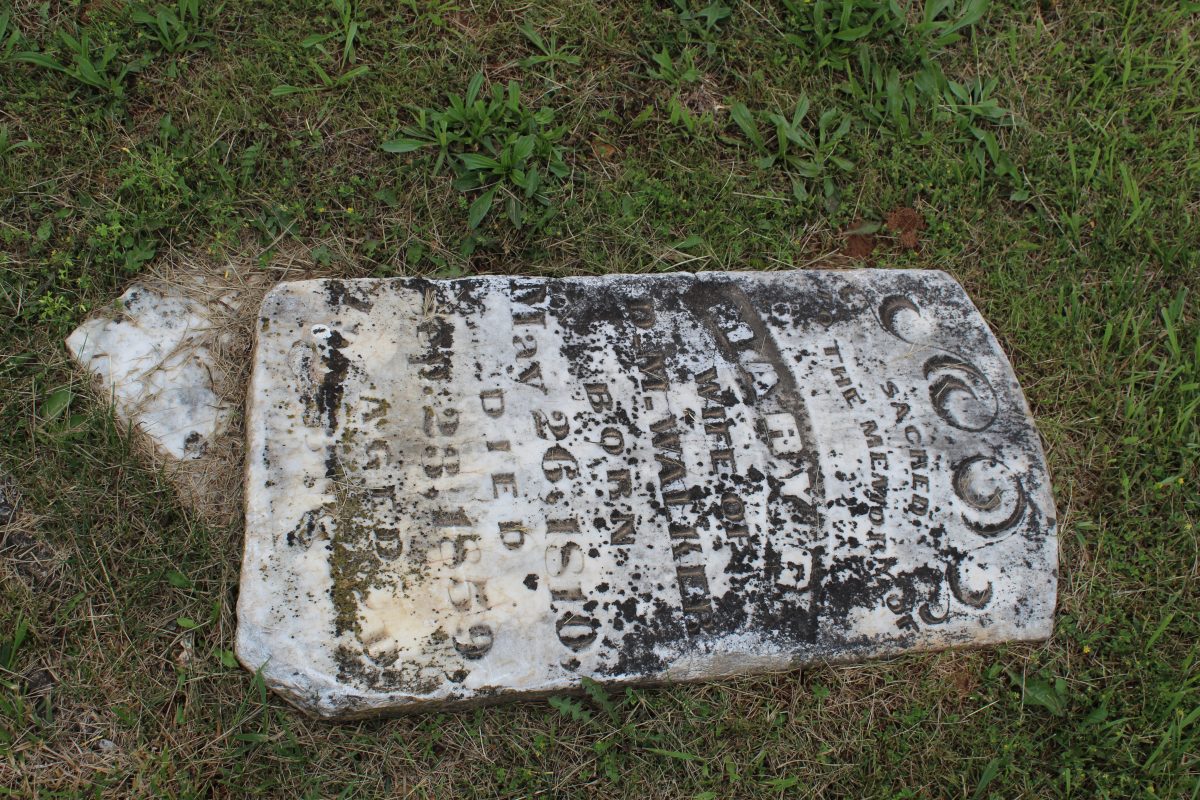 Photo by Shari Harris
The memorial stone for Mary Walker, 1810-1859, is detached from the base. The stone remains as possibly the last memory of her; it has outlived the people who knew Mary Walker, now it is in danger of extinction as well.

The date of the original cemetery deed was November 28, 1887. “John L. Carter and E.A. Carter, his wife To J.A. Craven, J.D. Julian, H.C. Kitching, S.P. Higgins, J.B. Sherrill, Trustees of graveyard property or their successors in office” reads the Warranty Deed. This plot of land is in the central part of the current cemetery, running east to west, with the west end the oldest portion.

January 24, 1924, the cemetery expanded when Fred A. and Josie M. Cameron deeded more property to the Trustees of Licking Cemetery and their Successors. On April 8, 1948, Donald S. and Mildred Wells sold another parcel of land to the trustees.

The “new” part of the cemetery, located along the south edge, continues to have plots for sale. Future burials are certain. A 200-year-old cemetery continues to grow. In another 200 years, will the cemetery have doubled in size? Will another cemetery board be struggling to tend to four centuries of graves? 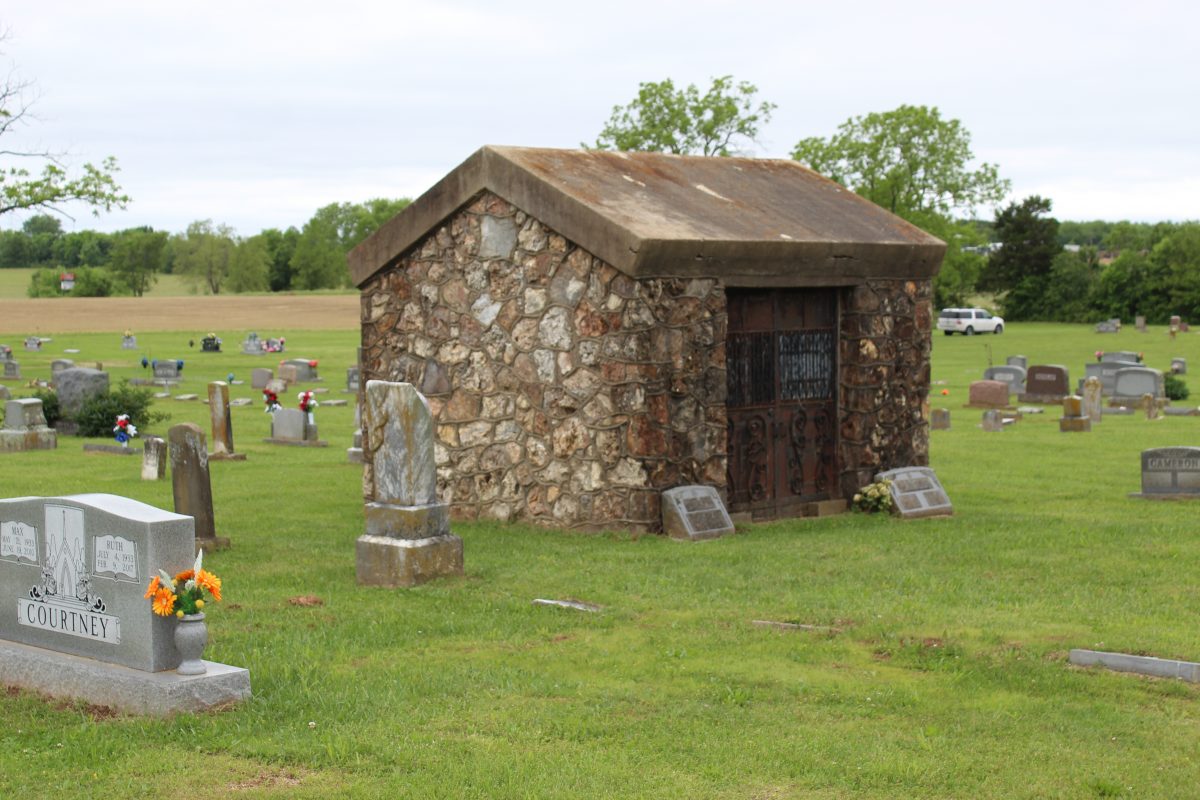 At their May meeting, the Licking Board of Aldermen heard a suggestion from the Cemetery Board regarding the city assuming ownership of the cemetery. This would ensure continuity of care for the cemetery and the city would benefit from maintaining an optimal appearance for those entering the community. But it raises questions of maintenance costs to the city, and families living outside the city limits may feel loss of a voice in the cemetery operations.

Regardless of who maintains control of the Licking Cemetery, it is obvious that more support is necessary. Support the cemetery with a donation today, or combine your donation with fun and competition as you participate in the 3-on-3 Basketball Tournament.

If donations aren’t feasible, suggestions for easing the work of tending the cemetery include: avoid flags with plastic poles as the plastic poles don’t withstand weedeaters; keep flags as far as possible off the ground to avoid shredding by weedeaters; place items near or on memorial markers to reduce trimming.