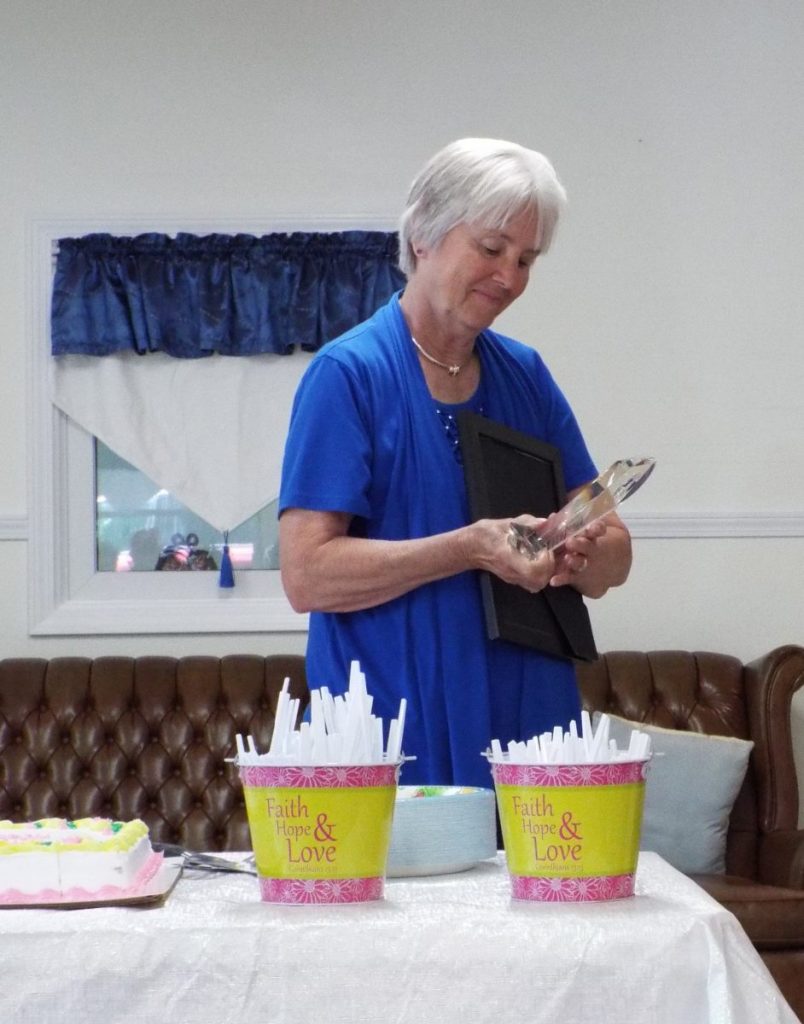 Photo by Christy Porter
Reggia Ward, the first recipient of the Licking Lifetime Achievement Award, was humbly honored by the recognition.

Reggia Ward was presented with the first Licking Lifetime Achievement Award for Volunteers at a reception held on Sunday with family and friends. The Licking Senior Center and the Licking United Community Help Center hosted the event in honor of Ward for her many contributions and her commitment to the community through her volunteer and fundraising efforts.

Ward received a framed Valuable Volunteer Award containing a beautifully written, poetic tribute and a trophy worthy of an Oscar presentation. When receiving her award, Ward said, “I’ve always had a great team working with me; I haven’t done it by myself. Thank you.”

From the largest need to the smallest, individually or community wide, Ward contributed whenever possible.

Ward started helping at the Licking United Community Help Center (Texas County Food Pantry) and thrift store at its first location in the bank building on Main Street. She continued to do so as it outgrew facilities and relocated to the old feed store, with food provisions stored at Town & Country Supermarket and finally at their current location. She not only continued her volunteer efforts, but also was instrumental in the new building. Sandy Floyd was the director; Ward and one other person were put in charge of fundraising for the new building.

“God was on our side. He would make sure we could do it,” said Ward. “With the generosity of the community, enough was raised to build and complete the facility using no grants, and additions have been done to support the distribution of food.”

LUCHC continues to grow and be self-supporting and debt free, which is something current director Donnetta James enjoys sharing with people and with other community help centers. Ward continues to volunteer both with food distribution and at the adjacent thrift store. James also acknowledged Ward on Sunday saying, “She helped get the (LUCHC) building done and paid for. Fundraisers are her calling!” Many in the audience agreed wholeheartedly.

The fundraising experience would be utilized again with the Licking Bridge Builders, aka the Licking Senior Center. Ward helped out at the senior center while it was still located in an old house, where she washed dishes and helped with special events. The old facility became too small, especially the kitchen, and there came a need for a new facility.

The Licking Senior Center holds a special place in Ward’s heart, as her mother, Dorothy Floyd was the first cook. With the personal connection, she again took on the challenge of fundraising and was also very hands on in making it happen. Her husband, Lonnie, and Frank Steward also took on the challenge and the beautiful, relatively new facility is used Monday through Friday for meals, activities and companionship by many in the community, as well as for special events. She continues to volunteer and assist with fundraising when needed.

Director Cindy Wampner has the highest accolades for Ward and shared, “After moving to the Licking community and becoming involved with the senior center, I was not used to all the volunteers. Reggia not only volunteered but she didn’t realize I was using her as a mentor, I was learning. We all appreciate everything she does!”

While working at Rawlings, Ward headed a committee to raise money to paint the “Baseball” water tower east of Licking. She also spearheaded a Christmas tree in the lobby of Rawlings for employees to “adopt” a child so they would have Christmas. She also implemented boxes for donations when people experienced a burn out, health challenges or financial difficulties.

Gladys Ward, Reggia’s mother-in-law, also involved Reggia in volunteer efforts to help those in need. A family with five or six kids lost everything, including clothing. The Ward women organized a sewing bee at Intercounty Electric’s community room to make outfits for the kids and the parents. Several volunteers came to help, some cutting fabric, some sewing it into garments. Ward remembers making a poster with all the kids’ ages, sizes, and what was needed. The poster helped the volunteers stay organized and accomplish the job.

For many years Ward, with other volunteers, has helped Licking sixth grade students create and complete their Underground Railroad Quilt, which is auctioned their senior year in support of the Texas County Museum of Art & History. Oftentimes going one step further, Ward, who was a well-known machine quilter, also quilted the student’s quilt. Additionally, behind the scenes, she has often donated quilts for raffles and fundraisers, contributing to the good cause.

The holiday season brings opportunities for special giving and in the past, Ward participated in the filling and distribution of holiday fruit baskets when an anonymous donor supplied the fruit. The baskets were distributed to those who greatly appreciated the holiday cheer.

Recently, Ward with the help of Donnetta James, who acquired the candy, joined with many volunteers at the senior center to fill 3000 eggs for Licking’s Easter Egg Hunt.

Family is important to Ward and one special fundraising event stands out for her – helping her own family have a lake vacation approximately 35 years ago. Not all family members could afford accommodations, food and travel expenses to attend. So Reggia initiated yard sales and the like until enough money was raised that all family members who wanted to attend could. Helping family didn’t stop there, as Ward’s sister, Pat Buckner, recognized her on Sunday for her help with fundraisers when the Buckner’s son, Robbie, had health problems and help was needed.

One volunteer activity, cleaning tombstones, is strictly prompted by a personal irritation. “It irritates me to see tombstones marred by buildup, so when I visit a cemetery, I take cleaning supplies and do what I can to clean them up,” says Ward. She does this irrespective of whose memorial stone it is.

When asked want motivated all her volunteering and fundraising, Ward responded, “I have always just wanted to help people.” She remembers that compassion being shown in her childhood home. An example is when a total stranger was walking by the family home at Christmas; her dad invited him in to eat, and he and her mother were always willing to help others.

While Ward still does some volunteering, she has greatly reduced her ongoing efforts due to time and physical constraints.

Ham sandwiches with condiments, chips and drinks were served at the reception. The congratulatory chocolate and white cake with ice cream was shared after the presentation.