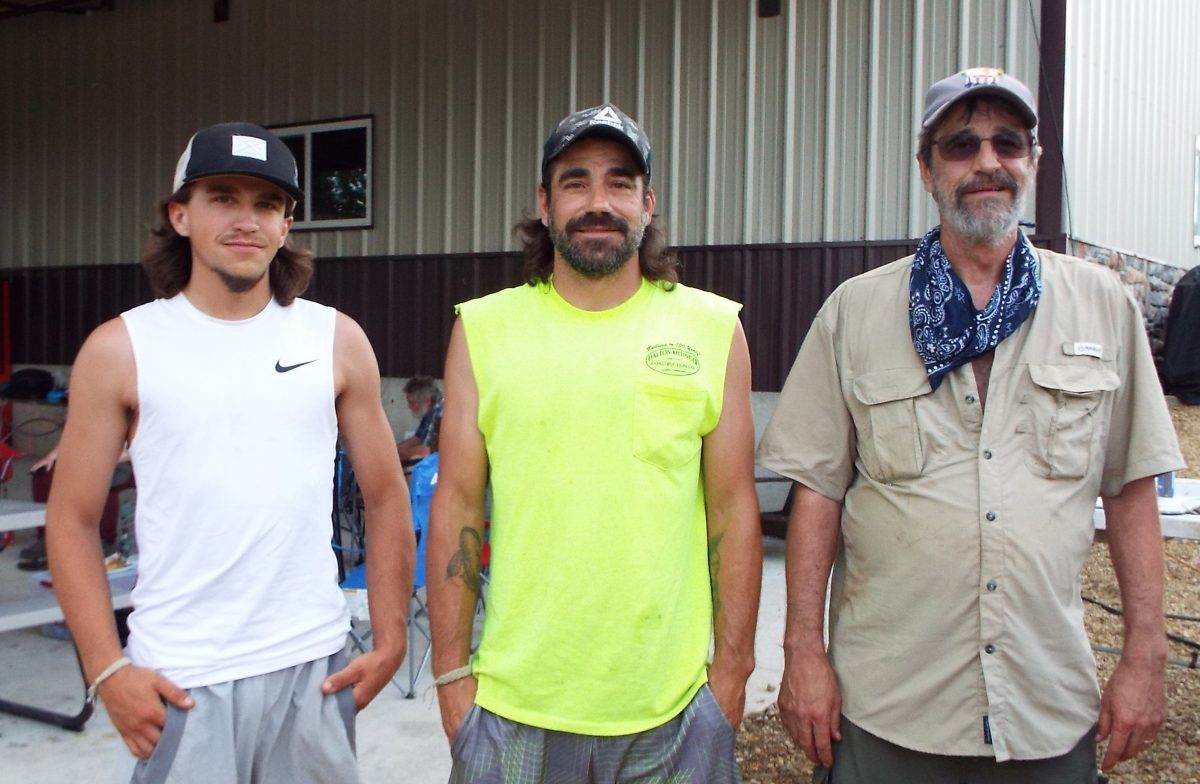 Photo by Christy Porter
Three generations of Walburns were at the Narrows survey program; they are, from left: Caden, Dustin and Michael.

Three generations of avocational archaeologists, Michael, father; Dustin, son; and Caden Walburn, grandson; participated in the Missouri Archaeological Society’s Piney River Narrows Natural Area survey program. This was the trio’s first time participating in a training session. They, along with Jessee, a son not at this survey, have a combined 100 plus years of looking for artifacts, often field hunting together on Sundays.

Michael’s interest in archaeology began when he started hunting arrowheads as a hobby, 34 years ago. While walking the plowed fields where modern agriculture sifts up surface artifacts and going to cut banks, which are tall, dirt banks along a stream or waterway where varying water heights will pull the artifacts to the surface of the bank, he made his discoveries. “It becomes a matter of catching them before they are washed away by any future flow,” says Michael.

Michael and his wife, Fay, had gone fishing after rains and flooding in 1987; they came upon a pile of rocks that, upon closer inspection, looked like broken arrowheads. Walking further Michael found a perfect White River point. He and Fay, along with their sons, discovered many more artifacts in the following years. “They really had no choice,” says Mike of his sons. “They grew up in the arrowhead fields.” Grandson Caden has also been raised in the fields, finding his first artifact at the age of six.

This type of observation by Michael and Dustin at a cut bank on a creek in Newton County in 2010 led to what is known as the Walburn Cache: A Late Archaic Cache. This apparent retrieval cache (a cache that was originally intended to be retrieved at a later date by those who left it) is documented in the July-Sept. 2019 MAS quarterly by Jack H. Ray, Assistant Director and Assistant Research Professor, Center for Archaeological Research-MSU and Michael Walburn. This collection included six pristine stone adzes that had never been used. Projectile points, smith point, scallorn point, drills and other various point types were also found at this site.

Archeologists were on site when, in 1992, MoDOT was re-aligning Hwy. 60. Michael first met Ray and his interest was piqued in the archeology of Missouri. In 2010 Mike was introduced to the Missouri Archeology Society when he met Lyle Sparkman, who along with Ray were co-founders of the Southwest Chapter. The following year he would again met with Ray. This meeting would lead to the recording of the Walburn Cache artifact collection.

The Walburns began attending meetings of the Ozark Chapter in Springfield and there learned of the Southwest Chapter in Joplin, where they attended until that chapter folded in 2019. Due to their continued interest MAS gave permission to start the chapter again in Newtonia. Michael is the MAS Southwest Chapter President, Newton County, and has participated in two digs with Ray and has recorded or helped record 11 sites; his hobbies include flint knapping (a chipping process to make arrowheads), carving and drawing. Dustin is the MAS Southwest Chapter Vice President, Dustin and Caden enjoy playing the guitar and writing their own music.

While president of the MAS Southwest Chapter the Browning Stone was brought to Michael by Michelle Browning. Michael, Dustin, and Browning conducted a pedestrian survey and collected all available information. The results were published by Michael Walburn and Lyle Sparkman in the MAS quarterly Oct.-Dec. 2020 edition. Definite identification of the stone has not been made as there is nothing to compare it with and it was not recovered in situ. It is possibly an African-influenced mortuary or memorial artifact.

“Mostly I think of the ancient people who lived, loved and died at the place, shares Michael when asked why he is intrigued with archaeology. “We’re helping preserve a tiny part of their history so the generations of the future will not forget.”

The Walburns wish to extend their thanks to the Hooper family for their hospitality, and the instructors and the group that participated this month. “Everyone we met were very nice people and it’s a wonderful community,” says Michael.

“Through the fields of Hemlock,

To the Osage heart!

We found the forgotten painting

Of a cultures rock art.

Hidden beyond the valley under

A shelter of stone.

The great spirit of Hunkah,

is still free to roam!!!

On a canvas of sand stone with

a splash of primitive red!

A never-ending story is

just waiting to be read!

The mysteries of the elders

At the remnants left behind!”