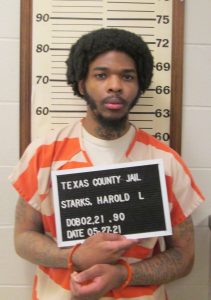 In a hearing on June 22, 2021, Judge John D. Beger granted a change of venue to Pulaski County after an Oct. 12, 2021, pre-trial conference scheduled in Texas County. Judge Beger also granted a motion to reduce bond, from the previous status of no bond to $500,000 bond.

Starks was an offender at South Central Correctional Center in Licking when he allegedly physically assaulted his cellmate, offender Stephen Goodwin, subsequently resulting in Goodwin’s death. Upon his parole from the Missouri Department of Corrections on May 27, 2021, Starks was arrested and transported to the Texas County Jail to await trial.

Goodwin received massive head trauma during the assault, which occurred on June 22, 2020, between 9:32 and 10:45 a.m. At 2:41 p.m. the same day, Goodwin was pronounced deceased at Mercy Emergency Trauma Center in Springfield, Mo. An autopsy found the manner of death to be a homicide, and indicated blunt force injuries to the head caused cerebral hemorrhage, tonsillar herniation and cerebral edema.

In an interview, Starks admitted to assaulting Goodwin, a 57-year-old offender from Greene County who was serving a life sentence for attempted first-degree rape. On March 30, 2017, Stark, a persistent offender and prior offender from the St. Louis area, began serving a seven-year sentence for tampering with a motor vehicle – first degree and resisting arrest/detention/stop by fleeing – creating a substantial risk of serious injury/death to any person.

Starks’ second charge is from an incident on April 27, 2020, when he is alleged to have “knowingly and purposefully spit saliva” on a correctional employee.

The above charges are mere accusations and are not evidence of guilt. Evidence in support of these charges must be presented before a court of competent jurisdiction whose duty is to determine guilt or innocence.