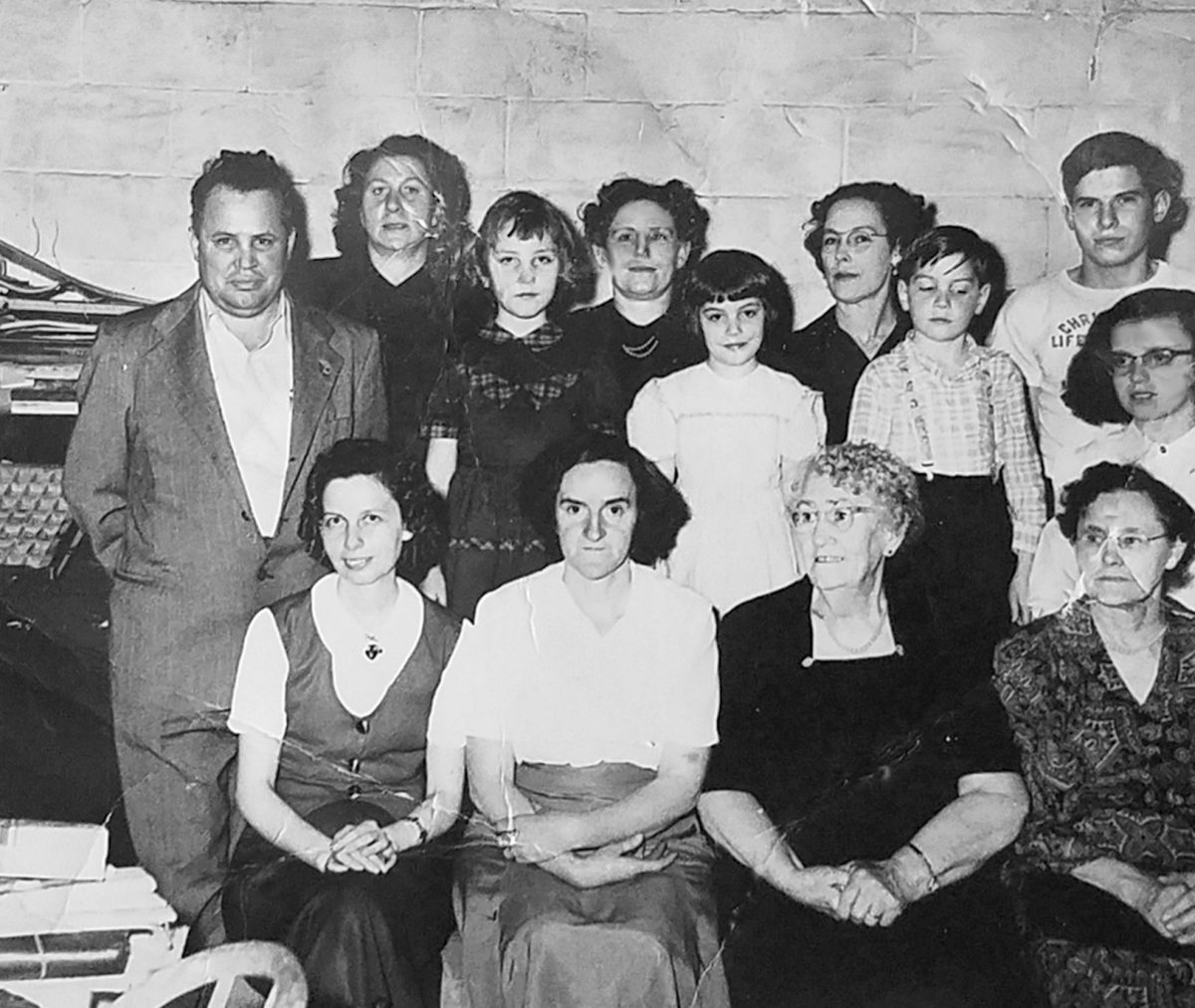 Recently my brother Gene sent me an old photograph from the 1950s. He’d been looking through photo albums and thought I’d like this one. It was taken in the office of our family’s weekly newspaper, The Licking News, published in Licking, Mo.

My family, a longtime newspaper employee and her daughter were in the picture. The photo also captures a group of women who were our “country correspondents.” These women lived in rural areas outside Licking and wrote news about their neighbors. The weekly columns were usually named with something related to where they lived.

Each week the correspondents called around to friends and acquaintances to gather information. Then they’d hand-write it on cut sheets of unlined newsprint that was provided by the newspaper. These missives were then mailed or brought into the office to be typeset for the next week’s paper.

Interesting news was also gathered from around town. I remember accompanying my mother Esther Derrickson as she stopped by various stores and asked them for news.

The items produced by these country correspondents would never appear in a modern newspaper. Here’s a sample of such information from an April 1950 issue of The Freedom Call:

The news items are somewhat like what you might see on social media today but in a more grammatical and formal format.

Each year the Licking newspaper hosted a gathering of our country correspondents. This gave them the opportunity to get acquainted and share tips on contacting their neighbors and obtaining information. My brother says a Mrs. Freeman sometimes came and spoke to the women about writing.

I have only vague memories of the occasions. I believe there was a meal involved with the meeting, probably potluck so the ladies could bring their favorite cooking creations.

For all their work, these women were rewarded with a subscription to the weekly paper so they could see their columns in print. They also received a supply of paper, usually newsprint cut to size, and of pens. A side benefit was the status of recognition in the paper and the reputation of knowing all about their neighbors.

Along with my brothers, I spent a lot of summers hanging around the newspaper office. Sometimes I was put to work assembling and hand-folding job printing orders. The newspaper printed all kinds of flyers, booklets, etc. As I grew older, the jobs became more complicated.

Around the time I started high school, I was taught to run the linotype. This massive machine towered above me. Each font of type was contained in a large metal form that had to be changed out so they were rarely changed.

Each letter had its own metal form. Typing a letter on the keyboard of the machine caused the letterform to drop into a frame. The operator had to keep an eye on the frame to see when a line was about full. You could add some spacers in manually to fill out the line.

When the line was finished, a push down on a large handle to the right of the keyboard sent the line to be cast with hot metal. Meanwhile, you’d start typing the next line.

It was important to stay alert because bad things could happen. Sometimes the equipment would jam and hot metal would squirt out of the form. I learned to listen for bad sounds and jump out of the way. I was too slow once and carry a small scar on my forearm as a reminder.

The keyboard on the linotype was completely different from a typewriter with lower case on the left and capital letters on the right. Numbers and punctuation had a separate section. The letters were in a completely different order from typewriters. I blame my linotype experience for my terrible grades later in high school typing class.

Eventually we changed from letterpress (using linotype and handset type) to offset (using paper paste-ups). We began using IBM typewriters with proportional spacing. My sister-in-law Glenna and I sat side-by-side typing the news. A line of type would be typed normally, and the typist would add counted spaces to the end of line. Then you’d tab over and type the same line again, adding in the required number of spaces between words to make a justified line of type, one that had an even edge on the right.

It was around this time that I was entrusted with typing the columns from the country correspondents. After asking Glenna’s help many times, I finally learned to decipher the worst handwriting. Since I had a reputation in school for being good at spelling and grammar, I felt confident in correcting the work of our correspondents as I typed. These were usually minor changes.

However, I ran afoul of my boss (Dad) one day when a correspondent reported that an ill neighbor “urped up his socks.” I changed it to the more genteel “vomited.” The correspondent complained. My Dad told me to stop editing. People enjoyed the more colorful descriptions. I was still allowed to correct spelling and fix mixed noun-verb errors, but my editing days were curtailed.

As news began to enter our homes through television and eventually computers, the country correspondents faded away. It was no longer acceptable to fill newspapers with such trivial news. For a time, we received complaints because the old-timers enjoyed reading about their neighbors.