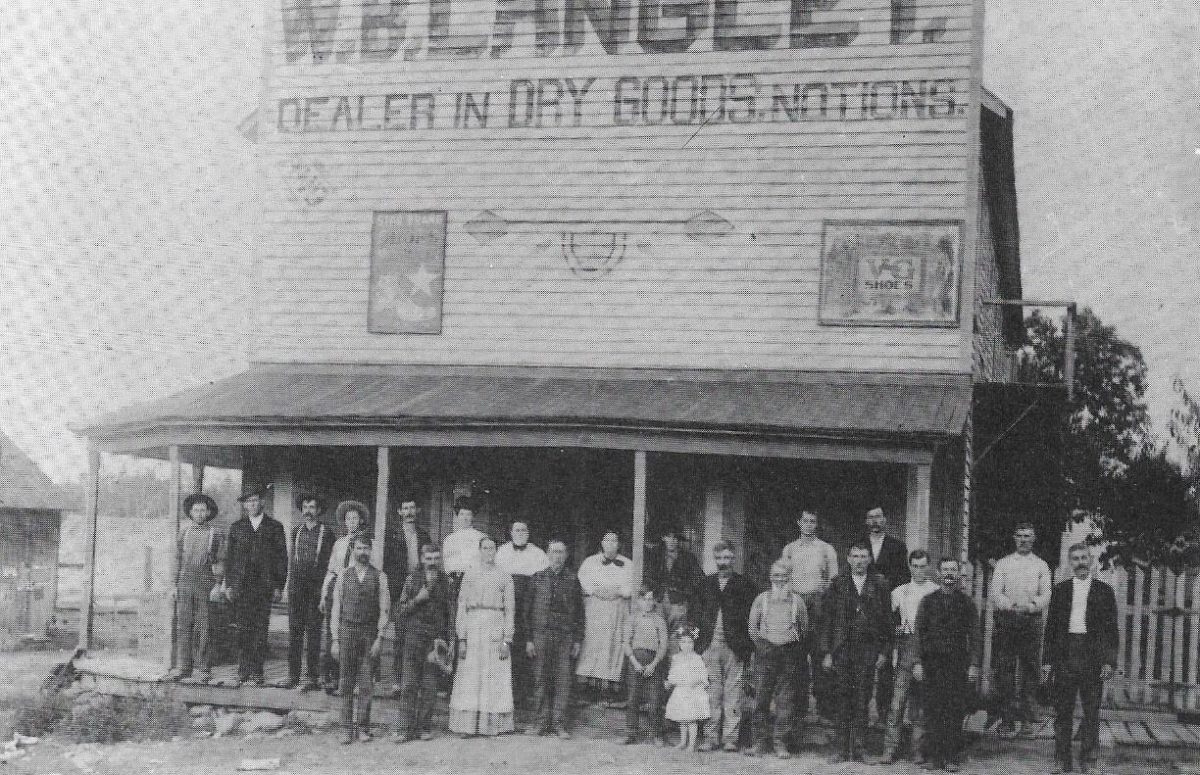 Special thanks to Lena McCoy Ward, of Houston, Joan (Cavaness) Brannam, of Success, and Historian Rick J. Gunter, of Sparta, for their contributions and help with this historical narrative.

If you’re going west from Licking on Highway 32 or northwest from Houston on MO-17, you are on your way to Success, both past and present.

The community area has also been known in the past as Ebbing Spring, Good Hope, Hastings, and Wye City or “The Wye”.

Within a mile of both MO-32 and MO-17, the community of Old Success originated on what remains a gravel country road. One-time resident Lena McCoy Ward, now of Houston, said, “Old Success was a thriving community, with numerous businesses and activities until the highways bypassed it and the post office moved to Wye City. The old-timers continued to call the new town of Success, Wye City.”

Historian Rick Gunter, of Sparta, who has family ties to the Success area, shared that in 1845, the first land cash purchase of 40-acres was made by William King in the future Old Success community. In the late 1840s, the Houston to Waynesville road was built and routed to access watering holes; it crossed the White River Trace near Ebbing Spring and edged the King property. Ebbing Spring was now conveniently very near the intersection of the White River Trace and the Houston to Waynesville Road.

Bushwackers, Union troops and Col. Coleman’s Confederate Calvary would use this route during the Civil War (1861 – 1865), putting local citizens in the direct line of the conflict.

Some of the first settlers in the area would be Dempsey and Sarah Turner Fielden, when they purchased 160 acres in 1860. Dempsey was killed by bushwhackers at his home in 1866.

Dexter Mason and his wife, Laura Ellen Mason, were also early settlers to the area. Dexter was a state representative in Missouri government in 1872. One story says that while he was serving in Jefferson City, the James gang spent the night at their home, where Laura was home alone. Legend also gives the Masons as the originators of the Old Success Cemetery. The two were out for a buggy ride on a Sunday afternoon in the 1870s. Dexter stopped and pointed to the hillside along Paddy Creek and said, “That would be a pretty place for a cemetery. I think I’d like to be buried there.” His was the first burial there in 1885.

“Good Hope” would appear as map dots as early as 1861 at the junction of White River Trace and the Houston to Waynesville Road. The town of Old Success would replace these map dots in future years. A story was told that the James Gang visited “Good Hope/Hastings” in January of 1874.

George Hastings Bender, a land speculator from St. Louis, purchased 800 acres in Texas County near Old Success in 1873 with plans to build a town. Bender believed the town site would attract the Kansas City, Ft. Scott and Memphis Railroad and proposed the name of Hastings for his new town. Bender’s partner, William Henry Hastings was possibly a relative. However, the proposed name was not used as told in a news item dated December 31, 1880. “A new town in Texas County. Geo. H. Bender, of St. Louis, has filed in the Recorder’s office, a plat of a town (40 acres) to be known as Success. The new town will be a prominent place when the new Memphis and Fort Scott railroad is built through the west part of the country.” The railroad did not run through the Old Success area as hoped, but the town of Old Success would in its day be a success.

Old Success was designed with a public square to be used for public gatherings. Baseball games, traveling shows and circuses, croquet courts and the annual Success picnics were held there.

1880 would be a good year for the new township of Old Success; the first postmaster (1880 – 1882) Anderson “Huff” Cardwell would ensure postal service, and the W.B. Langley General Store would open as a partnership.

W.B. “Braz” Langley, Anderson Cardwell, and Dr. William Neal opened the W.B. Langley General Store in 1880. Locals referred to it as the “Big Store” because it was larger than others. Along with a large variety of store goods, they also carried farming equipment and operated a livery barn, an icehouse and weight scales across Success Road. The upstairs was a hotel with four rooms and was also the Rebekah, Yeoman and Odd Fellows Lodge Hall. Langley bought his partners out in 1882. Langley would also serve as postmaster circa 1889 –1890.

Lena McCoy Ward’s father, Wm. “Harvey” McCoy, born in 1888, was raised and lived in Texas County all his life. Harvey was a nephew of Braz Langley and worked for Langley at the “Big Store,” beginning at the age of 13. Harvey’s father, Adam “Boy” McCoy, passed away at a young age in 1892. Harvey then helped take care of his mother, Anna Langley, and his younger siblings after the passing of his stepfather, Frank Pittman. He married Nancy Isabell Ramsey in 1914 and they had 14 children, Lena the youngest. As so many Ozarkian families, Harvey farmed and hunted to survive on his 40-acres near Old Success. With only a fourth grade education, he was quite productive as a freighter, mail carrier, switchboard operator, taking care of the horses at the livery stable, and doing whatever needed to be done to support his growing family.

As recounted to Ward, there was at that time an Odd Fellows Hall, a bed and breakfast with Mrs. White cooking, the store, a livery stable and Granny Lane’s log cabin. Harvey, as a hired hand, built fires for Granny Lane.

Lena’s in-laws Roy Eugene and Bonnie (Way) Ward also lived in Old Success prior to moving to Wye City, which would become the “new” Success.

Lena remembers hearing stories of the traveling salespeople, once called “drummers,” that would bring samples to the store. “One drummer brought glass washboards that when thrown wouldn’t break. Apparently Uncle Braz didn’t throw it right,” she laughingly recalls.

Asbury Wolford is a remembered employee at the Langley store; he worked despite only having one arm, possibly having lost the other arm in a molasses mill accident.

Lena’s dad also shared stories of going to the railheads at Cabool and Mtn. Grove with a wagon and team to pick up freight. When the weather was cool he would walk with the wagon and team to keep warm. Sometimes he would even go to Springfield for freight, catching a train to get there. When delivering the mail from Houston to Success, he went by horseback.

Ownership of the store would then pass with some familial ties through Ida Belle Platter, who later married Allen J. “Al” Burton. Burton took over the store after the death of Langley in 1905. Later James “Jim” Platter, husband to Adda Minerva Burton, ran the store until 1934.

The Langley store was then left to “Little” Willie Burton, who Lena remembers being told that as a child would get into the cash register; unfortunately the store failed under his ownership.

Two long, narrow buildings built in the 1880s housed a drugstore and later a saloon was added. The store opened in the mid-1880s and Dr. Walter Davis Fansler purchased the drug store about 1899. Schuyler Colfax Langley owned the store in the late 1890s. The third owner, George Rondeau, is believed to have added the saloon in the early 1900s.

Other known businesses in Old Success in the late 1800s were: J.P. Bates and J.C. McClellan – lumber dealers, they also possibly had a sawmill; P.B. Loy was a shoemaker; W.P. Vance was a physician; and there was a livery stable.

The first blacksmith in the 1880s was Owen Orin Powers; his shop was near the little spring branch of Langley’s Store.

Robert Lee “Bob” Rodman operated a blacksmith shop on the west side of the drug store. He was married to Oma McCoy, Harvey’s older sister, and was also the justice of the peace who married Lena’s parents in 1914.

The church was located at the southwest corner of the Public Square; it was built as a Methodist Church but was also a Southern Baptist Church at one time. Grover Quick purchased the church building in the late 1930s. He had begun to tear it down when it mysteriously burned in the middle of the night. “The Success community was without an established church for over 30 years,” shared Lena Ward.

And so Old Success flourished as it moved into the 1900s.