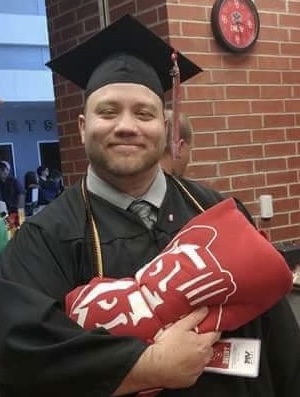 Ian Edward Heath, age 44, son of George Edward and Rebecca Yvonne (Lee) Heath was born March 16, 1977, at TCMH in Houston, Mo. He passed peacefully to be with his Savior at Cox South Hospital in Springfield, Mo., on July 23, 2021.

Ian is survived by his wife, Kellie, and son, Cohen, of their home in Nixa; his mother of Houston; sister, Alison (Montana) Wilcox of Ames, Iowa; his grandparents, James and Gail Lee of Raymondville; mother-in-law, Jackie Stalcup of Nixa; brothers-in-law, Jeck O’Toole (Sandy) and Rick Wilbur; nieces, Alannah, Charley Belle, Brittany and Caitlin; nephews, Ian and Jeremy. Ian will also be missed by his uncles, Don, James (Wanda) and Billy (Helen); his aunts, Beth Ann (Jack), Kathy (Dennis), Shirley, Delaina, Michaelle and Sondra. All his cousins Ian grew up with on Gran and Pa’s farm, playing at Uncle James, Aunt Hazel and Uncle Kenneth’s home will remember the fun times they had. Recently Ian met, learned to love, and disciple, Cohen’s best friend, Gaige Longley, who he considered an honorary son. Gaige will miss him, along with many other relatives, and dear friends Ian considered to be his extended family.

Ian grew up in the Raymondville and Houston area. He lived in Watson and Rockport, Mo. for two years and attended kindergarten and part of first grade there. The remainder of his elementary years were spent at Raymondville, then he graduated from Houston High School in 1995. Ian loved art, music, drama, writing and finally football. Through the years he attended college at SMSU, OTC, and graduated from Drury University, as had his mother, father, and sister, before him. Ian held degrees in English, writing and Education. He worked in several industries, absorbing knowledge and skills from each one that he incorporated into his life, work and recreation.

While working at MCI in Springfield he met his wife to be, Kellie. They were married privately in a special ceremony arranged by their friends Kevin and Tina Miranda in Dexter, on August 11, 2001. Ian and Kellie’s formal wedding was performed on August 10, 2002, at Nixa First Assembly. On October 17, 2006, their first son, Cohen was born. On July 23, 2021, Ian was reunited with their son, Aedon Thane, who was waiting for him with the Savior.

Ian was an active member of Wildwood House of Prayer in Raymondville during his youth where he was guided in God’s word by his parents, grandparents, uncles, aunts and loving church friends. Kellie led Ian to become a member of Nixa First Assembly where they were both choir and worship team members. Ian loved God, his family, friends, and nature, and his life reflected these loves.

Ian’s full desire was to know God more and to make him known.

Services were held Tuesday, July 27, 2021, at 2 p.m. at Evans Funeral Home with Pastor Terry Webster officiating. There will also be a Celebration of his Life Saturday, August 14, 2021 (Time to be determined later) at Nixa First Assembly. Memorials may be made to Friendship Cemetery. Pallbearers are Cohen Heath, Sean Stephenson, Mike Stilley, Ian Markunas, Kevin Miranda, Kevin Weeks, Gaige Longley and Nick French.